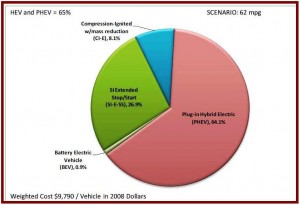 The 62 mpg case assumes standards at the high-end currently being considered by the U.S. government. Meeting this would increase the average cost of a vehicle by $9,790. The two higher scenarios, 56 and 60 mpg, are reliant on both significant cost reductions in battery technology enabling higher penetration rates and radically higher gasoline prices. CAR concludes that there is a significant probability that they will not occur to the degree necessary to make achieving the mpg targets economically viable.

Some of the proposed changes to increase fuel economy and decrease greenhouse gases starting in 2017 could cost new car buyers from $3,700 to more than $9,000 per vehicle if they are adopted, and that’s before another $1,500 or so is added for additional safety equipment. The new fuel economy mandates under consideration by the government are based on reducing emissions at rates ranging from 3% to 6% per year. It’s the same as increasing fuel mileage equivalent amounts. The highest increase, 6% per year, will raise the Corporate Average Fuel Economy (CAFE) from 35.5 mpg in 2016 to 62 mpg in 2025. The Administration expects to announce the proposal in September 2011.

The report, The U.S. Automotive Market and Industry in 2025, from the Center for Automotive Research, asks the question “What will anticipated mandates for increasing vehicle fuel economy and improved safety do to the automotive industry in the United States?” (The full report is available at www.cargroup.org.)

Building an earlier research CAR concludes the higher the new standards, the lower auto industry employment and the worse the air quality since people will hold onto vehicles even longer than the record number of years they do now because of price increases.

A few of the report’s conclusions are:

CAFÉ has been controversial sine last May when , President Obama announced that EPA, DOT and California would begin working together to assess the performance and costs of a variety of technologies that could be available in model years 2017-2025 as the first step in possibly extending the current national emission and fuel economy standards.

That was before Republicans regained control of the House of Representatives in November and proposed a series of actions to prevent further national increases in standards. Nonetheless the three agencies have completed an interim technology assessment that is the background support for up to 62 mpg gallon requirements.

In a joint document, the Interim Joint Technical Assessment Report (TAR), the California Air Resources Board (CARB) and EPA/NHTSA proposed four greenhouse gas (GHG) emission reduction scenarios – 3%, 4%, 5% and 6% per year from the currently mandated 2016 level, representing four technology “scenarios” each with a separate level of cost per vehicle. The most extreme scenario (6% reduction per year) calls for a fuel economy mandate average of 60 mpg by 2025. Technology costs to the consumer are estimated for these scenarios through 2025 but no explicit discussions of the potential impacts of these estimates on U.S. motor vehicle demand, production, or employment are offered.

This July, the Obama Administration also plans to finalize the first-ever national fuel economy and greenhouse gas emission standards for commercial trucks, vans and buses built in 2014 to 2018.  These standards are expected to save hundreds of millions of barrels of oil over the life of these vehicles and promote the development and deployment of alternative fuels, including natural gas.