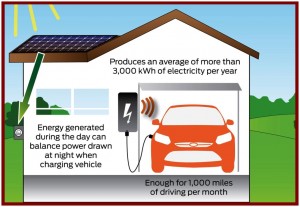 Let’s hope the Ford board of directors used arithmetic and not green math while approving the investments required for Ford EVs, and potential customers use the new green math.

Ford Motor and SunPower Corp. will offer  a solar system that it’s claimed will allow Focus electric vehicle owners to reduce their cost of ownership by generating enough energy from a home rooftop solar system to offset the electricity required to charge the Focus EV at night.

The cost for the system is said to be $10,000, after possible taxpayer subsidies and not including modifications to the roof, electrical service panel or undefined charges for “excessive” wiring.

The 2.5 kilowatt rooftop solar system for a house has panels that produce an average of 3,000 kilowatt hours of electricity annually. These “high-efficiency” solar panels generate approximately 50% more electricity than conventional panels, Ford said in a release.

Using what appears to be the new “green math” favored by politicians and supporters of so many, alleged, environmentally friendly vehicles, Mike Tinskey, Ford director of Global Vehicle Electrification and Infrastructure, says “owners can reduce their total cost of ownership by generating enough energy from their high efficiency SunPower rooftop solar system to offset the electricity required to charge the vehicle at night.”

Well, let’s see: When Ford introduced the Focus electric vehicle – likely to be $40,000 before taxpayer subsidies and due in limited quantities late in 2011 – it said the national average for a kilowatt hour of electricity is $0.11. So if you have enough sunshine to generate the 3,000 kWh, that means you save $330 annually for a pay back period of, um, 30 years and four months for the solar system alone (using basic arithmetic, not green math). The solar panels are guaranteed for 25 years by the way.

Moreover, the life of the expensive 24 kWh lithium-ion battery pack used in the Focus electric vehicle (roughly $20,000 at current prices) is unknown, and Ford has not announced the warranty.

Ford is betting a lot of stockholders money on electricity, which includes the launch of five electric vehicles in North America by 2012 and in Europe by 2013. Ford launched the Transit Connect Electric small commercial van in 2010 and will have reasonable quantities of the  all-new Focus Electric available during 2012 after a late 2011 rollout.

Ford estimates the cost to fully charge the Focus EV at $2 to $3 based on a nationwide average electric rate of $0.11 per kWh. These models will also be joined in North America by the new C-MAX Hybrid, a second next-generation lithium-ion battery hybrid and C-MAX Energi plug-in hybrid.

Let’s hope the Ford Motor board of directors used arithmetic and not green math while approving the investments required for Ford electric vehicles, and potential customers use the new green math.Otherwise this could be a very expensive lesson in market economics.