Posted on 2 December 2011 by Kenneth Zino 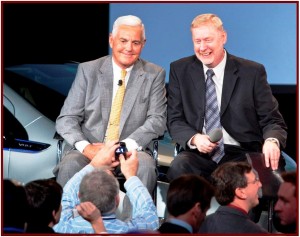 In Lutz's own words, he is "often wrong - but seldom in doubt."

The rear-wheel-drive small Cadillac entry will once again try to earn its way into a sports sedan segment long dominated by the BMW 3-Series and Mercedes-Benz C-Class and their predecessors. Previous Cadillac small car entries – the laughably incompetent front-drive Cimarron based on the Chevrolet Cavalier, and the Opel-cloned rear-drive Catera – were spectacular failures of course. 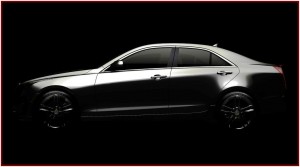 “We have extensively and exhaustively studied the competitive segment, and we have benchmarked the best. And when this car comes out, that will be readily apparent,” said General Motors North America President Mark Reuss.

“ATS enters the biggest market segment in the global luxury car industry, both in terms of volume and importance,” said Barra.

No kidding. ATS better be good when it appears next fall.

But when I asked what GM consultant Bob Lutz was doing these days, Barra said she was trading e-mails with him about getting Lutz to drive a new Chevy Sonic, which has been on sale globally for a couple of years. While Barra called Lutz an “automotive rock star,” there was no hint in her brief response that she was spending any time with Lutz.

Hum – so much for the theory that Lutz could help her in the transition to her new job. I guess Lutz’s experience at BMW, or Ford of Europe, or his decade at GM wrestling with a broken design staff and product development organization, among the directly relevant positions, or his current vague role as consultant still means he is a GM outsider. And consultant doesn’t carry much clout inside any automotive bureaucracy. 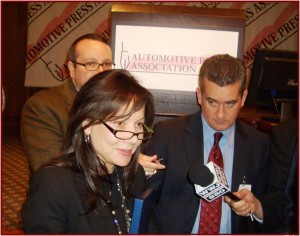 Barra said she has spent much of her time seeking and executing efficiencies in the way GM develops products. Core architectures – the basic building blocks of new vehicles – accounted for 30% of volume when she took over. Today, the same architectures cover 48% of volume. The goal is 90+%.

Barra, 49, as head of Global PD at GM post bankruptcy came to her high visibility position last January once occupied by formidable car guys, including Tom Stephens and of course Lutz. Before that her position was vice president, Global Human Resources. (See Lutz’s latest book Car Guys vs. Bean Counters for his opinion of the army of GM human resource people who ran a bureaucracy that not only didn’t reward people who created successful products, but actually actively worked against it with an incentive system that rewarded bad products albeit delivered on time. It was one reason for GM’s well-deserved, well-earned bankruptcy.)

Previously, Barra, a second generation GM lifer, had been vice president, Global Manufacturing Engineering. Both Lutz and Stephens carried the title of vice chairman, so Barra’s job was downgraded in the latest GM reorganization, which gives her something to aspire to I guess.

After a year Barra remains unknown to the product and engineering experts who cover General Motors, which is not saying that she can’t ultimately do good things in the position. Success in product development is key of course to taxpayers recouping their investment in the reorganized General Motors Company. GM stock currently trading in the low $20-range would have to soar to more than $50 for taxpayers to break even. Right now that looks like betting on the snowball traversing the burning nether regions un-melted has better odds.

And while the company has had some recent product successes, it is by no means clear that GM can maintain and then increase its market share, particularly in the U.S. and Europe.

And if anybody should be deeply, screamingly involved in taking on the Germans in small sports sedans and coupes – it’s Lutz with his endless quest for “turn on” products. At least I think so, even if I have to listen to his egomaniac bluster at the North American International Auto Show in January when ATS debuts. (Lutz doesn’t think much of the press either – read the book – in his words he is “Often wrong – but seldom in doubt.”)

2 Responses to GM Plans Four World Debuts at NAIAS. Where is Bob Lutz?