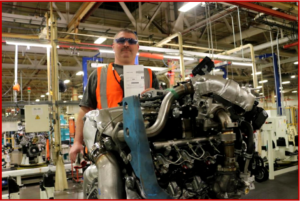 General Motors, DMAX, and I.U.E.-CWA Local 755 employees celebrated the assembly of the 2 millionth Duramax 6.6L V-8 turbo-diesel engine this week. Groundbreaking for the new DMAX, Ltd. plant began in 1998, with the first engine rolling off the line 17 July 2000. DMAX when established had GM taking 60% ownership. Isuzu owns 40% of the joint venture.

“When we started this project, who would have expected we would achieve 2 million engines? I do recognize that although we made 2 million engines, it could not be achieved without the support of all employees, said Chief Executive Officer of DMAX, Shinichi Suzuki. “The most important thing is not that the 2 million engines have been manufactured, but that they have been sold by the effort of the entire team.”

DMAX has increased its employment during the past few years as the economy recovered from the Republican-induced Great Recession and currently employs 554 I.U.E.-CWA Local 755 hourly, and 114 salaried employees for a total of 668.

Employees are currently building the redesigned Duramax 6.6-liter V8 turbo-diesel. This next-generation engine offers more horsepower and torque than ever — an SAE-certified 445 horsepower (332 kW) at 2,800 rpm and 910 lb.-ft. of torque (1,234 Nm) at 1600 rpm – said to enable easier, more confident hauling and trailering.

Along with a 19% increase in max torque over the last Duramax 6.6, the redesigned turbo-diesel’s performance is claimed to be quieter and smoother. It is also capable of running on B20 biodiesel composed of 20 percent biodiesel and 80 percent conventional diesel. B20 helps lower carbon dioxide emissions and lessen dependence on petroleum. It is a domestically produced, renewable fuel made primarily of plant matter, mostly soybean oil.