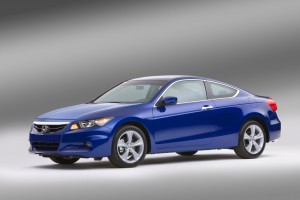 A six-speed manual transmission finally appears but only on the most expensive models. No 6-speed automatics coming until the next gen Accord, due in the fall of 2012, an unbelievable lapse from Honda.

The 2011 Honda Accord Sedan and Coupe models have changes that include improved fuel economy, modified exterior and interior styling and the addition of a new leather-Special Edition (SE) trim level at a relatively inexpensive $24,000 price.

It’s a mild, but badly needed upgrade of the eighth generation Accord that appeared in 2008.

The Accord was the first Japanese-nameplate car assembled in the United States. That was way back in 1982 when Accord was being made in Japan and in a brand-new automobile assembly plant in Marysville, Ohio. 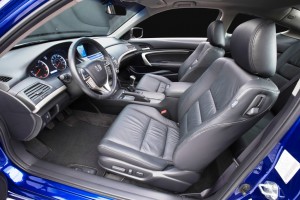 The Marysville plant is the sole global source of the Accord Coupe.

The success of that Accord set a path for Honda’s huge American expansion, which propelled it into the automotive big leagues, and ultimately proved that building cars in America was a viable proposition to Nissan and Toyota who followed Honda in the U.S.

Accord’s fuel economy improvement is most significant since Accord still lacks a sixth transmission speed, unlike Toyota and other competitors some of who are moving to even more gear ratios in the near future. Given the competitiveness of the segment – accounting for almost 20% of the cars sold in the U.S., Honda is still playing catch up here. This unexpected lag for what normally is a company that resides at the top of the innovation column of the scorecard is puzzling.

More ominous – longer term – is the large drop in Honda R&D spending since 2008 when the reckless practices of Wall Street resulted in the ongoing Global Great Recession and cutbacks at all makers. My savvy media friends are questioning if Honda has lost its way, or if this is just a temporary detour? The upcoming Civic redo is shaping up to be a make or break car for Honda in media minds.

For the 2011 model year, Honda claims that improvements to Accord’s aerodynamics, reductions in engine friction and changes in transaxle gear ratios contribute to higher fuel economy ratings. What if any effect these have on performance and feel awaits road testing.

On paper things look good: EPA fuel-economy ratings for Accord 4-cylinder sedan models equipped with an automatic transmission improve by 2 miles per gallon (mpg) in the city, 3 mpg on the highway and 2 mpg combined, for a city/highway/combined rating of 23/34/27 mpg.

Honda has already sold more than 220,000 Accords this year in sedan or coupe versions with 4-cylinder and V6 variations. This excludes almost 24,000 Accord Crosstour SUV models.

Toyota Camry total sales – though down – are close to 276,000, meaning that Honda is no longer threatening Camry’s, eight-year best-selling streak, as it was when Toyota was at the height of its unintended acceleration and stuck gas pedal controversies earlier this year.

Both Accord and Camry leases start in the $200/month range right now, and well-equipped models are offered at under $300. It’s a buyers market.

New features include steering wheel-mounted paddle shifters on the Accord EX-L V6 Coupe, a USB audio interface on all coupe models and Accord EX and EX-L Sedans. There’s also a rearview camera on sedans equipped with the optional navigation system. Accord EX-L V6 models receive a two-position memory for the driver’s seat. Other updates on all models include new seat fabrics, and a changed instrument panel design.

The optional 3.5-liter, 24-valve SOHC i-VTEC V6 engine now produces 271-horsepower and continues Variable Cylinder Management (VCM) technology that can deactivate up to half of the cylinders while cruising to improve fuel economy. Preliminary EPA fuel-economy ratings for the 2011 Accord V6 Sedan are 19 city/30 highway mpg, an improvement of 1 mpg in highway driving.

The “performance-oriented” Accord EX-L V6 Coupe with the 6-speed manual transmission has a unique 3.5-liter V6 VTEC engine (without VCM) that provides a performance-tuned valvetrain, intake and exhaust system to broaden the torque curve in the low- to mid-rpm range for enthusiast-level performance.

A premium 270-watt audio system comes standard on Accord EX Coupe and Accord EX-L Sedan models, and includes a six-disc CD changer and seven speakers including an 8-inch subwoofer. XM Radio is standard equipment on all Accord EX-L models.

The Honda Satellite-Linked Navigation System (available on Accord EX-L) uses an 8-inch screen and an interface dial for user input. Features include the Zagat Survey guide for restaurants, nightlife, hotels and attractions. Accord EX and EX-L Coupe and Accord EX-L Sedan models include Bluetooth HandsFreeLink as standard equipment for connecting wirelessly with compatible mobile phones.

The Accord Coupe (4-cylinder) has 17-inch alloy wheels as standard equipment, with 18-inch alloys standard on the Accord V6 Coupe. All Accords have four-wheel disc brakes.

Ken Zino is an auto industry veteran with global experience in print, broadcast and electronic media. He has auto testing, marketing, public relations and communications expertise garnered while working in Asia, Europe and the U.S.
View all posts by Kenneth Zino →
This entry was posted in auto news, new vehicle, road test and tagged 2011 honda accord, auto informed, autoinformed, autoinformed.com, honda accord, Ken Zino, new car, zino. Bookmark the permalink.