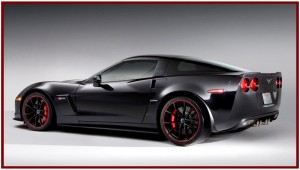 The tires are street-legal versions of racing tires developed for the American Le Mans Series.

Chevrolet announced today that its 2012 Corvette Z06 and ZR1 models will debut this July with optional Michelin tires are capable of more than 1.1g in lateral acceleration, the highest ever for the sports car.

Testing at Virginia International Raceway has demonstrated, according to a 2012 Corvette release, an improvement of approximately three seconds per lap when the cars are fitted with the new optional Michelin Pilot Sport Cup Zero Pressure tires, which are available on the two highest-performing models, the lightweight, 505-horsepower (377 kW) Z06 and the maximum-performance, 638 horsepower (476 kW) supercharged ZR1. The Michelins are competition-oriented tires, optimized for warm, dry conditions to increase cornering and handling capability.

American sports car fans can get their first look at the 2012 Corvette models – including the racing-inspired appearance of the Chevrolet Centennial Edition at a special event this weekend at the National Corvette Museum in Bowling Green, Kentucky.

The Chevrolet Centennial Edition Corvette package comes only in Carbon Flash Metallic, with satin-black graphics and Centennial Satin Black wheels and red brake calipers. The wheels are constructed of lightweight cast-spun aluminum and include a thin red outline around the perimeter of its surface on the Z06. The wheels are specific to respective Corvette models, including 18-inch/19-inch for Coupe, Convertible and Grand Sport; and 19-inch/20-inch for Z06 and ZR1. (See Chevrolet Corvette Centennial Edition Markets Racing Heritage)

“We constantly strive to make the Corvette a better car on the road and the track,” says Tadge Juechter, Corvette vehicle line director and chief engineer. “For 2012, the Corvette lineup achieves its highest performance level ever, while at the same time being easier to drive and enjoy thanks to several changes and new features inside the car.”

When combined with the Corvette’s Performance Traction Management (PTM) technology – which manages torque delivery for maximum performance – the tires are expected to help set new benchmarks for Corvette performance. Engineers estimate an 8% gain in maximum lateral acceleration, to more than 1.1g, and shortened braking distance.

The Cup ZP tires were developed by the same Michelin engineers who develop tires for Corvette Racing in the American Le Mans Series and are street-legal versions of a racing tire. They are included in the optional Z07 performance package on the Corvette Z06 and a new PDE performance package on the ZR1. The 285/30-19 (front) and 335/25-20 (rear) tires are matched with all-new aluminum Cup-style wheels in satin black or machined finishes. They are about five pounds lighter (2.2 kg) and stronger than the 20-spoke wheel offered in 2011.