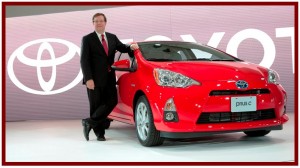 Prius C will be available in four grades starting this March, all powered by a 1.5-liter DOHC, 16-valve engine with VVT-i, a 60 horsepower permanent magnet AC synchronous motor, and a 144 volt nickel-metal hydride battery pack.

Though relatively high prices for a sub-compact car in the U.S., Toyota is betting that the hatchback with an EPA-estimated 53/46/50 city/highway/combined mpg, along with Toyota’s unquestioned leadership in hybrid vehicles, will be sufficient to make the car a success. Notably, the highway rating leads all cars except plug-in hybrids, which benefit in the ratings from credits when they run on electricity. Even the base Prius C model is loaded with equipment as an added incentive to spur sales.

No sales projections have been released, although Toyota has sold more than one million Prii in the U.S. and more than 3 million hybrid models globally. In the U.S. during 2011 Toyota sold more than 136,000 of the larger Prius liftback and V models, down slightly at -3% from 2010. In spite of clear fuel economy benefits and ongoing high U.S. fuel prices, hybrids remain a tiny portion of the U.S. auto market – a little more than  2% of  overall sales – because mainstream buyers refuse to pay a premium amounting to several thousand dollars or more over a comparable gasoline-fueled car.

The Prius C is smaller and lighter than its mid-size Prius stable mate with 19.1 inches less length (157.3 vs. 176.4 inches OAL) and 542 lbs. less weight than the Prius Liftback (2,500 vs. 3,042 lbs.).  In adapting the Hybrid Synergy Drive to the smaller Prius C platform, each of the system’s components were re-designed to reduce weight, scale, and improve efficiency.