The Corvette concept in 1953 had  a checkered flag crossed with an American flag, which was changed for production because it was illegal. Now the sports car is fighting irrelevancy.

Seven better be a lucky number for the 2014 Chevrolet Corvette. The so-called C7 – for the seventh generation of the fabled – and now fading – All-American sports car is an attempt to revive interest in what might be a dissolving market, the 2-seat, front-engine, rear-drive American sports car.

Underneath a revised Crossed Flags logo that dates back to the original 1953 Corvette is a remake of the current production C6 formula that resulted in a sales drop to about 14,000 units annually during the last couple of years. The 911 Porsche sells at about 25,000 annually in the global market, a number that GM execs hope can be obtained with the new Stingray with its North American sales. 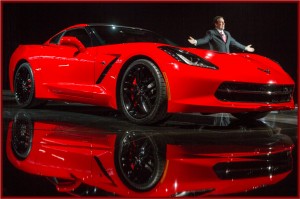 GM President North America Mark Reuss unveils the 2014 Corvette Stingray on Sunday 13 January in Detroit.The new Corvette is the most powerful and expensive standard model ever. C7 will accelerate from 0-60 in less than four seconds.

This sales decline from an annual rate of at least twice that in Corvette’s halcyon days is part economic and part fashion as the winds of change buffeted the auto market. The economic aspects include the Great Recession and the struggles of Corvette’s buyers in an ailing U.S. economy, as well as the pernicious effects on sales of 500 to 600 horsepower Camaro and Mustang models costing half as much as the equivalent ‘Vette.

Moreover, we will only note in passing here the booming muscle SUV market led by the Porsche Cayenne from another famous sports car maker that is now noted in the result columns for its sales – internationally – of performance trucks and SUVS as often as it for sports cars. 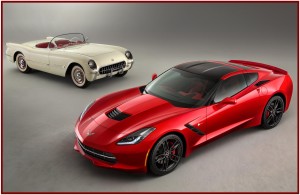 It looks good. The question remains – can the 2014 Corvette Stingray double sales?

Chevrolet is betting that the addition of multiple creases and accent lines in the fiberglass and carbon fiber body shape, along with the return of the Sting Ray name on the base car (costing a  couple of thousand dollars more than the current +$52,000 coupe), along with a new 7-speed manual transmission – finally matching the Porsche 911 –  as well as cylinder deactivation for the latest versions of the small-block V8 – will be enough to keep the Corvette relevant and profitable.

C7 will come with the requisite HID and LED exterior lights, and a touch screen, cockpit interior with the latest I-phone look. Gone for the moment – post GM bankruptcy – is the plan for a smaller, lighter mid-engine Corvette to take on the latest hot world-class designs as in Cayenne, to name just one. Even with an all-new aluminum space frame in place of steel, and hollow aluminum control arms and other weight trimming tweaks, C7 will be a 3,300 pound (or more) beast when it reaches showrooms later in 2013. Engineers are striving for a 50/50 weight distribution on a tow-seat car that will have about an inch longer wheelbase and an inch wider front and rear tracks, with a couple of inches more of  overall length compared to the C6. 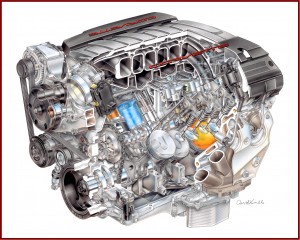 The first small block V8 debuted in the Corvette in 1955. It displaced 4.3-liters (265 cubic inches) and was rated at 195 horsepower, drawing air and fuel through a four-barrel carburetor.

The heart of the Corvette will be a smaller 6.2-liter V8 with slight increases in horsepower and torque – at 450 each – when compared with the current 7-liter LT1 engine. Cylinder deactivation under light loads will cut the direct-injection, pushrod two-valve V8 engine down to 3.1-liters in effect. A variation of the electronically tuned dual-mode exhaust of the current Grand Sport will, allegedly, spare the driver the discordant sound of a, ahem, V4 Corvette. Yes, we said a V4 Corvette is coming to U.S. interstates.

This latest Corvette LT1 engine, the first of the so-called Gen 5 family of small block engines, combines several advanced technologies, including direct injection for the first time and cylinder fuel shut off as mentioned, and continuously variable valve timing along with an advanced combustion system. Zero-to-60 mph times of less than four seconds are predicted for the base car. The new LT1 is the third engine in the Corvette’s history to be so-branded, with previous versions introduced in 1970 (Gen 1) and 1992 (Gen 2).

The LT1 cylinder head has smaller combustion chambers designed to work with the volume of the new shape of the pistons’ heads. The smaller chamber size and sculpted pistons produce a relatively high 11.5:1 compression ratio. The head has large, straight and rectangular intake ports with a slight twist to enhance the motion of the air-fuel mixture as it blows up. There is a reversal of the current intake and exhaust valve positions when compared to the older engine design. The spark plug angle and depth have been revised to protrude farther into the chamber, placing the electrode closer to the center of the combustion chamber to support “optimal” combustion.

Yes, Corvette C7 will still have a performance and price advantage against the base Porsche 911 Carrera – about 100 horsepower more and ~$30,000 less. Whether it can revive the fortunes of America’s first and still reigning-champion sports car awaits the judgment not of nattering scribes, the ilk that said Porsche could never sell a sedan, let along an SUV, but of potential buyers. Is it radical enough? Can they afford it? We will see if the C7 can add significantly to the more than 1.5 million in sales that the last six generations of Corvettes have produced.

Editor’s note: This story has been revised from the original version to show an official GM photograph released after AutoInformed published its own the C7 story.