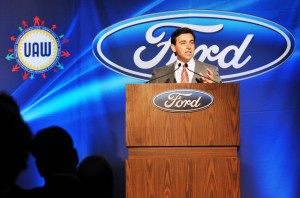 Ford promised to double profits next year.  It’s fate is in the hands of customers, currency valuations and the cost of warranty repairs and recalls.

The Detroit Three – FCA, Ford Motor and General Motors all posted 2014 profits that were sharply down from a year earlier in a booming global auto market, but each had different reasons for the steep declines.

This, of course, in stark contrast to other global automakers, notably Volkswagen Group, and Toyota Motor Corporation, both with record breaking results.

At FCA, the renamed Fiat Chrysler, merger costs gobbled up huge amounts of money for a 56% decline in profits to $1.2 billion. These result even though global sales rose 15% to 2.8 million vehicles. A large part of the drop was caused by charges of $1.17 billion to erase debt and make payments to the United Automobile Workers union for stock it owned as part of Chrysler’s bankruptcy reorganization in 2009 that eventually turned over ownership of Chrysler to Fiat. Last year the company also benefited from a huge, one-time tax break. The former Chrysler Group with its strong earnings from Ram pickups, minivans and Jeeps has been propping up earnings at an ailing Fiat ever since.

Ford Motor posted net income of $3.2 billion, or 80 cents per share in 2014. This was $4 billion lower than a year ago, including the non-repeat of a favorable fourth quarter $2.1 billion tax special item from a year ago. Only North America – at $6.9 billion and Asia Pacific at $589 million – made money. Wholesale volume was about equal with 2013, while company revenue declined 2%. Ford vowed to double profits in 2015.

Ken Zino is an auto industry veteran with global experience in print, broadcast and electronic media. He has auto testing, marketing, public relations and communications expertise garnered while working in Asia, Europe and the U.S.
View all posts by Kenneth Zino →
This entry was posted in financial results and tagged autoinformed, autoinformed.com, Ken Zino. Bookmark the permalink.