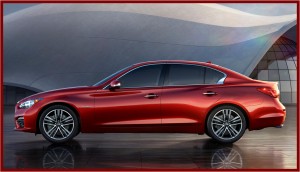 Well, it’s not German luxury design, that’s for sure.

Infiniti unveiled an all-new 2014 Infiniti Q50 sedan at a press conference at the 2013 North American International Auto Show – NAIAS – today. The compact Q50 takes many of its exaggerated styling cues from the Infiniti Essence concept, with swooping curves and angular accent lines, in an attempt to separate itself from more traditional German designs, which is not necessarily a good thing. Inside, the Q50 interior offers a driver- oriented cockpit with communications system that has large dual touch-screens.

Q50 will be available with a choice of a 328-horsepower 3.7-liter V6 or new Q50 Hybrid. Both powertrains will be offered with rear-wheel drive or all-wheel-drive.

“This morning we are about to launch Infiniti on a bold new journey, a new Infiniti brand direction built on a foundation of our past and guided by a clear vision for the future,” said Infiniti president Johan de Nysschen, who was poached from Audi last year, not in time to influence the controversial design.

Infiniti reported a year-over-year U.S. sales increase of 22% for 2012 at 120,000 vehicles. The “rocks and trees” luxury brand (based on its Japanese style showrooms and advertising) has been in the shadow of Toyota’s Lexus, which sold 244,000 vehicles during 2012 and is introducing a compact IS sports sedan at NAIAS.