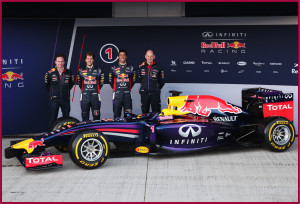 Unveiled this morning at the Jerez Circuit in Spain ahead of the first day of testing, the RB10 is powered by the Renault.

Today in Spain Red Bull showed its latest Renault powered Formula One car dubbed RB10 that will race during the upcoming 2014 season.

The 2014 season is important for the future of the struggling sport, which could not fill the grids during 2013, because of two major rule changes on engine size and chassis aerodynamics.  Gone  in Renault’s case will be a normally aspirated 18,000 rpm V8 replaced by a turbocharged 1.6-liter V6 with much higher electrical content – kinetic energy recovery – and strict fuel consumption rules of 100kgs  for a race (160kg used during 2013). There is also a maximum flow rate.

The next major change is with the aerodynamics. What sounds like quite a small change, a 75mm reduction in the width of the front wing on each side, has had a big aerodynamic effect. Previously, the front wing end plate allowed us to put the flow off the tip of the wing outside of the front wheel, but now the front wing end is right in front of the wheel – about the worst possible place, according to Adrian Newey who runs the F1 team that has won the last four Drivers’ and Constructors’ titles.

The airflow is not inside or outside, which means most of it stalls in front of the front wheel. Some finds its way outside and the rest comes inside. The front wheel wake becomes much bigger now and that causes all sorts of problems downstream as you approach the side pod and diffuser used to distribute the air.

Newey says that there will be a lot of strategy in a Formula One race. At most of the races he thinks will be fuel capacity limited, so teams will have to save fuel during the race. “That will mean a different driving style, where you are compromising lap time at certain points to save fuel. The question then is how you use your remaining fuel. Do you go out quick at the start and then save fuel, or save fuel and sprint at the end – all that will come in to play,” says Newey.

Ken Zino is an auto industry veteran with global experience in print, broadcast and electronic media. He has auto testing, marketing, public relations and communications expertise garnered while working in Asia, Europe and the U.S.
View all posts by Ken Zino →
This entry was posted in racing and tagged adrian newey, autoinformed, autoinformed.com, formula one, Ken Zino. Bookmark the permalink.