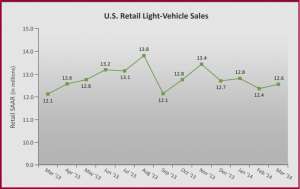 “The selling pace for the year was slow out of the gate.”

U.S. March auto sales are showing signs of improvement based on the first 13 selling days of the month. Total U.S. light-vehicle sales during are expected to rise 6% to ~1.5 million units. Fleet sales as a percentage of total sales remain low, with March share expected at 20%, which is 1% below March 2013.

New-vehicle retail sales in March are showing signs of improvement – projected at 1.19 million or +7% year-over-year – following slower-than-expected sales in the first two months of 2014.

The seasonally adjusted annualized rate or SAAR for retail sales projected to reach 12.6 million. Retail sales in February were 946,766 with a SAAR of 12.4 million.

“The selling pace for the year was slow out of the gate, but the industry remains poised for stable growth in the near- to mid-term,” says Jeff Schuster, at LMC Automotive, the source of the soothsaying. “Modest improvements are expected as 2014 progresses,”

The average new-vehicle retail transaction price in March, as it has been for seven consecutive months, remains above $29,300, up nearly $700 from March 2013 and the highest level ever recorded for the month of March.