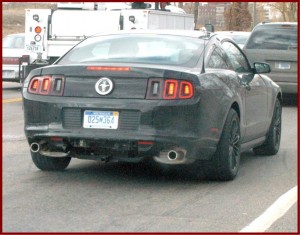 This is a working Ford test vehicle for the next generation Mustang and a Lincoln rwd coupe.

Ford Motor, reeling from the negative local backlash over its plans to shut down all its manufacturing operations and the death of the Falcon in Australia, will counter with what it hopes will be good news by confirming the next generation Mustang due in 2015 will go global and offer right-hand-drive models.

Jim Farley, Global vice president of sales and marketing, will make the announcement down under on 13 August, according to Ford insiders who are not authorized to speak publicly with AutoInformed.

The move in keeping with the much touted and thus far less followed ‘One Ford’ philosophy promoted by CEO Alan Mulally may or may not revive Ford’s slumping fortunes in Australia where both the Ford brand and GM’s Holden brand are being beaten to a pulp by Japanese automakers.

Nevertheless, the Ford announcement will apparently catch GM napping as it tries to take its Chevrolet brand global with both of its iconic performance cars, Camaro and Corvette, only available in left-hand-drive versions. (To delve further into the Chevy marketing mess at GM, consider it is now planning on bringing into the U.S. a left-hand-drive version of the late, unlamented Pontiac G8 (itslef a Holden) as a Chevrolet SS thereby having two competing Chevy’s in the same showroom – the fwd Impala and rwd SS – for the flagship designation.)

The new Mustang will follow Camaro’s successful fifth generation revival of 2009, by emulating its adoption of an independent rear suspension. IRS offers some ride and handling advantages over the truck-like solid rear axle layout of the current Mustang – a more refined ride, less axle tramp and better traction on smooth as well as rough pavement.

However, the higher costs involved in the complicated independent design with a rear sub-frame, multiple locating arms, coil springs and sophisticated bushings, as well as the additional weight incurred as a result, have been the disadvantages that stopped its use at Ford until now. Indeed, the current Camaro is about 300 pounds heavier than the Mustang, about half of which is the rear suspension.

Mustang aside, the move also will setup another attempt at making dying Lincoln more than a re-badged Ford. Lincoln desperately needs an answer to the Cadillac ATS compact, so the planned coupe and sedan versions will need an IRS to be credible. The unnamed Lincoln will come off the same platform as the new Mustang.

This, ironically, is a revisit of the original plan for the last Mustang, now dead Thunderbird, and now dead Australian Falcon, now dead Lincoln LS and the sold off Jaguar S-Type going back to the LS/S-type launch in 1999. Ford was supposed to consolidate all the cars going forward based on the extremely competent shared S and LS platform, but never did because of internal politics, executive bickering, national chauvinism and, well, stupidity. (For history buffs, until early 1960 ford Canada built both right and left hand drive versions of North American cars for what was then known as the ‘Sterling’ markets. )

The question now remains is “One Ford” a new name for what remains the older Dearborn and dominion dominated chimneys screwing each other, or rather the beginning of the emergence of the real thing? Ford has made such promises under various names going back to the mid-1990s under the aborted ‘Ford 2000’ program. Its time has come again…