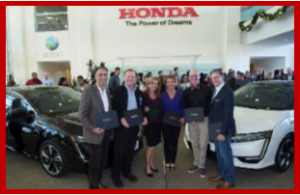 Customer deliveries of Honda’s third-generation fuel cell vehicle, the 2017 Honda Clarity Fuel Cell, have begun at some dealerships in Southern California. The Clarity Fuel Cell has the highest EPA driving range of any zero-emission vehicle in America, including all fuel cell and battery electric vehicles, at 366 miles and a fuel economy rating of 68 combined MPGe (miles per gallon of gasoline-equivalent).

Retail leasing of the Clarity Fuel Cell is available through Honda’s network of 12 approved dealerships, including six dealerships in Southern California, five in the Bay Area, and one in Sacramento. Honda will expand its fuel cell vehicle dealer network as the network of public hydrogen fueling stations expands across the state.

“In the year ahead, we will continue the roll-out of the new Clarity series of electrified vehicles, to include battery-electric and plug-in hybrid models,” said Steve Center, vice president of the Environmental Business Development Office at American Honda Motor Company.

California has approved a plan to develop up to 100 hydrogen refueling stations in the state during the next several years. This California initiative dovetails with some increased government support of hydrogen infrastructure development at the federal level, such as H2USA (http://h2usa.org/). The California Energy Commission awarded $44.5 million for the development of 28 new hydrogen stations (plus one mobile fueler), bringing the total number of hydrogen fueling stations (open, in-development, and proposed) to more than 50 stations promised soon.

The Clarity Fuel Cell is available for what looks to be a competitive introductory lease price of $369 a month for 36 months with $2,868 due at signing. The lease terms include a mileage allowance of 20,000 miles per year, up to $15,000 of hydrogen fuel, up to 21 days of an Avis Luxury Rental in California, 24/7 roadside assistance, and eligibility for California “White Sticker” single occupant HOV access.

The 2017 Hyundai hydrogen-powered Tucson fuel cell has carry over pricing at $499 a month. Customers in Southern and Northern California need a down payment of $2,999. They also get unlimited complimentary hydrogen refueling and “At Your Service Valet Maintenance” at no extra cost. The Toyota Mirai is also on sale now in California at a reduced $349 a month with $2,499 due at lease signing.