2017 US Sales Trickle Down – Reversing Run-up

Posted on 7 January 2018 by Kenneth Zino 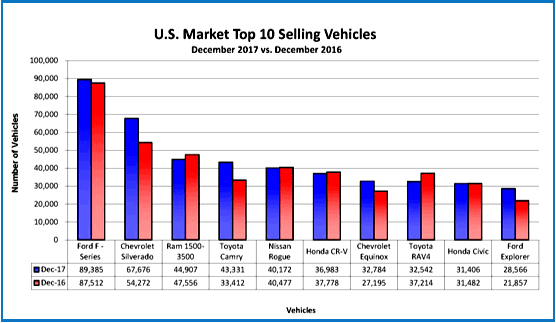 Unlike the alleged positive – or certainly debatable – effects of the Trump tax cuts for the rich, the 2017 calendar year saw US auto sales trickle slowly down from previous record years. AutoData Corp. says the seasonally adjusted annual rate (or SAAR) during December was 17.9 million units compared to 18.2 million units a year ago.Total industry deliveries, un-adjusted for business days including all brands, dropped -5.2 % compared to December 2016 and -1.8% from full year  2016.

December’s Top Ten sellers list was dominated by trucks, SUVS and crossovers – unremarkable ,as it has been for years, but important because this is more than 20% of total US sales volume – where the money and profits are.  Ford F-Series, Chevrolet Silverado, and Ram pickup trucks continued to lead in the top three spots. Buyers of SUVs (or crossovers) preferred the Nissan Rogue (fifth place), Honda CR-V (sixth place), Chevrolet Equinox (seventh place), Toyota RAV4 (eighth place), and Ford Explorer (tenth place).

Toyota Camry finished December in fourth place, making it the top-selling car in the U.S. It was linked on the month’s Top Ten list by the Honda Civic in 9th.

While hardly a disaster in 2017, the question remains when will the market drops significantly? Here opinion vary – next month or two years from now? 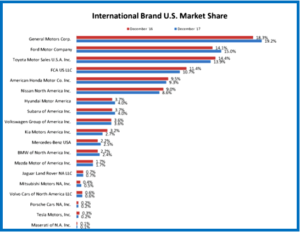 Offshore brands captured 55% of the U.S. auto market in December and 55.7% for 2017 overall. December market share figures were down slightly from the 56.2% share import brands held in November, although overall sales were up at 882,393 units for the month.

Ken Zino is an auto industry veteran with global experience in print, broadcast and electronic media. He has auto testing, marketing, public relations and communications expertise garnered while working in Asia, Europe and the U.S.
View all posts by Kenneth Zino →
This entry was posted in news analysis, sales and tagged aiada, autodata, autoinformed.com, Ken Zino, US Top Ten Sellers. Bookmark the permalink.