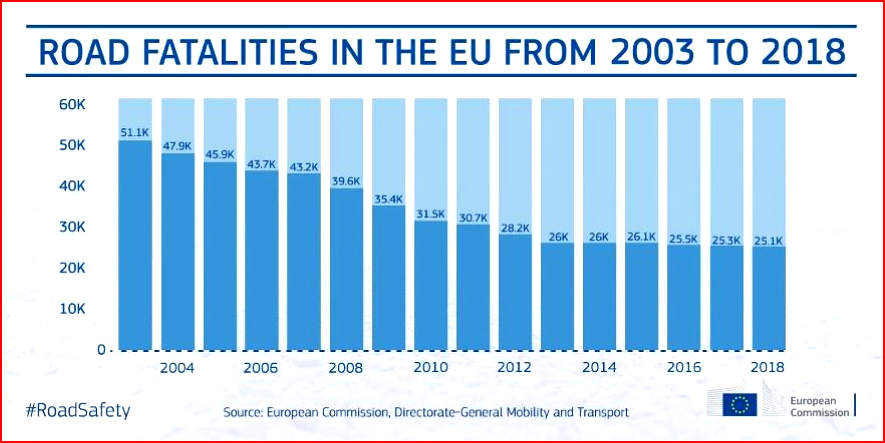 Here comes cruise control that won’t allow you to exceed the speed limit. Click to Enlarge.

Fewer people died on European roads last year, but more efforts are needed to make a big leap forward, according to new, preliminary figures on road fatalities for 2018 published by the European Commission late last week.

With an average of 49 road deaths per one million inhabitants, European roads are by far the safest in the world. But the EU says it also shows it is  off track to reach a target of halving the number of road deaths by 2020. This underlines the need for swift action by Member States and the entire road safety community to deliver on the EU’s strategic road safety action plan, published in May 2018 as part of the Juncker Commission’s ‘Europe on the Move‘ package, which set out specific actions envisaged under the current Commission mandate.

The Commission has already delivered concrete measures on vehicles and infrastructure safety, and both were agreed upon by the Parliament and Council in early 2019.

For infrastructure, risk mapping will be carried out for all motorways and for primary roads, and vulnerable road-users will have to be systematically considered in all safety assessments, audits and inspections.

For vehicles, a number of safety features will be included in all new vehicles, such as Intelligent Speed Assistance to help drivers keep within the speed limit, and other proven new technologies such as Automated Emergency Braking and Lane Keeping Assistance.

Only two EU Member States recorded a fatality rate higher than 80 deaths per million inhabitants, against 7 in 2010. The countries with the highest fatality rate were Romania (96/million), Bulgaria (88/million), Latvia (78/million) and Croatia (77/million).

A large number of vulnerable road users were affected: pedestrians, cyclists, motorcyclists and the elderly, particularly in urban areas. With demographic changes and the ongoing trend towards active and sustainable mobility, these groups are expected to represent a higher proportion of road users in the future and will require particular attention.