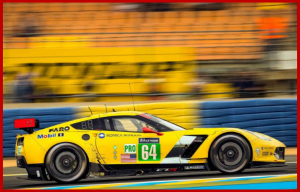 The Chevrolet Corvette Racing C7.R #64, driven by Oliver Gavin, Tommy Milner and Jordan Taylor, races to victory at Circuit de la Sarthe Sunday, June 14, 2015 winning the GTE Pro class of the 24 Hours of Le Mans. It was the eighth Le Mans victory for the Corvette Racing team since its debut here in 2000.

Designing a car to win the 24 Hours of Le Mans in the year 2030 was discussed at today’s 13th annual Michelin Challenge Design and Automotive Press Association design panel held at the Detroit Athletic Club.

“Maybe the significant changes will be in the level of autonomous or remote control of the cars?” said Ben Bowlby, the owner of Bowlby Racing, who was part of the panel. We need to work out what the objective of racing in 2030 is and what the rules will be. Only then we can determine what the race car will look like.”

The panel discussed potential breakthroughs in race car design and the types of innovations and technologies that could contribute to a 2030 Le Mans winner. The discussion was moderated by Ben Ebel, Design Coordinator, Original Equipment, Michelin North America & Co-Chair of Michelin Challenge Design.

discussing developments during the last 15 years at Le Mans and projecting what the future may hold, Fehan said, “Le Mans is the most difficult race for production race vehicles and specialty race vehicles. It’s difficult to win and when you do, the world knows you. “With Corvette’s philosophy, we’re planning 5-7 years out. We’re building it. We’re driving it. We’re racing it. There will be a metamorphosis sooner rather than later.”

“From a designer’s point of view, Le Mans is the most interesting, open and relevant competition in the world today. Look at all of the great marques that have built credibility and image through their participation at Le Mans,” said Marek.

“There is such a diverse range of vehicles and Le Mans has something for everyone,” said Bowlby. “Le Mans is especially technologically relevant. The endurance aspect remains an important headline.”

With Ford’s return to Le Mans in 2016, a total of 14 makes will now compete at Le Mans and/or in the North American based IMSA WeatherTech SportsCar Championship.  “I don’t know who the next company will be to enter Le Mans,” said Bowlby. “What Le Mans does, however, is bring credibility and legitimacy.  So, if a new company wants the sense of ‘I have arrived’, they will enter.”

Ken Zino is an auto industry veteran with global experience in print, broadcast and electronic media. He has auto testing, marketing, public relations and communications expertise garnered while working in Asia, Europe and the U.S.
View all posts by Kenneth Zino →
This entry was posted in performance, racing and tagged apa, autoinformed.com, automotive press association, Ken Zino, le mans, michelin. Bookmark the permalink.