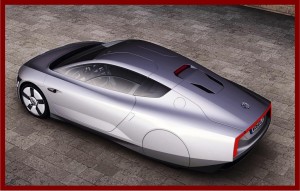 Styling is a combination of GM's Impact with the latest aerodynamic tweaks.

Volkswagen is showing a two-seat XL1 prototype this week at the Qatar Motor Show in Daho that it claims uses 0.9 liters of gasoline for every 100 km traveled, or more than 260 miles per gallon for the metrically challenged.

If Volkswagen XL1 makes it into production, no other vehicle would be more fuel efficient. However, the XL1 uses a variety of expensive technologies – including carbon fiber body parts – to achieve the stunning results.

CO2 emissions of 24 g/km are also claimed since they are directly related to the consumption of carbon based fuel.

A two cylinder, turbocharged, direct injection 35 kW engine and a 20 kW electric motor/generator are used with a 7-speed dual-clutch transmission and lithium-ion battery in the plug in hybrid.

Volkswagen says the XL1 can also be driven for up to 35 kilometers in pure electric mode.

The XL1 is the third take on Volkswagen’s highly promoted “1-liter” car strategy that started with the first 1-liter concept shown in 2002 and then the so called L1 that was shown in 2009.

Progress is being made here – at least by press release – since XL1 has side-by-side seating rather that the silly tandem seating of the earlier two concepts, which were the darlings of green car, internet set, even though they weren’t for sale.

Volkswagen also claims that together with unnamed suppliers, it has developed and patented a new system for carbon fiber reinforced polymer parts production – what is also called the aRTM process (advanced Resin Transfer Molding) to lower the cost of carbon fiber body parts.

No further technical details were released. And when – or if – a limited production run is planned, you guessed it – is unknown.