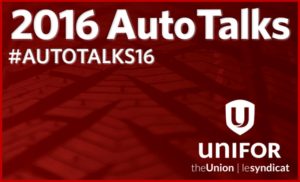 The new agreement achieved the union’s top priority to secure investment, product and jobs at the Windsor operations and it follows the pattern of financial gains achieved with GM and Fiat-Chrysler.

All three tentative agreements with Ford Canada were ratified by members, over the weekend. Across all bargaining units, the contract was approved with a vote of 58%. This number shows production members voting 56% and skilled trades with 72%. The office units represented by Local 240 in Windsor ratified with 97%.  Local 1324 in Bramalea had 100% approval at the parts distribution center.

“We solidified a footprint for the future of auto in Canada and none of this would have happened if our union was not willing to fight for principles and to do it together,” said Unifor National President Jerry Dias.

Ford will spend $613-million in Windsor to arrange the Essex engine plant to build a new 7-liter engine. It also agreed that Ford will keep Essex engine production going until 2020. Essex was scheduled to close.

Highlights of the 2016 Contract

“Our success in these negotiations should be a reminder to all employers and the government about the kind of jobs and economy that Unifor is fighting for,” Dias said.

An independent study from the Centre for Spatial Economics released in September 2016 showed the importance of the auto industry in Canada, finding that the Detroit Three automakers contribute some $26 billion to the Canadian economy, up to 150,000 jobs and up to $4.7 billion per year  in government revenues. The study came to this conclusion by examining the impact of the Detroit Three leaving Canada. For more information on the study, click here.