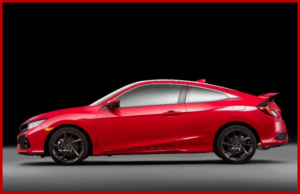 The Honda Civic Si Prototype made its global debut today, giving potential buyers a look at the design and performance direction for the 2017 Civic Si Coupe and Si Sedan, both launching next year. The Civic Si Prototype will be on display at the 2016 Los Angeles International Auto Show where it will be joined by its Civic Sedan, Coupe and Hatchback siblings, plus the radical Civic Type-R Prototype, providing the first public opportunity to see all five Civic variants. This will also be the first time the Type-R interior will be shown.

“With the new Honda Civic Si, we’re injecting even more sporty goodness into our 10th-generation Civic lineup,” said Jeff Conrad, senior vice president and general manager of Honda.  “This will be, hands down, the fastest, best-handling Si we’ve ever offered to our customers.”

The Civic Si Coupe and will launch next year as the latest additions to the 10th-generation Honda Civic lineup, joining the Civic Sedan, Civic Coupe and just-launched Civic Hatchback. The rollout of the 10th-gen Civic lineup will be completed with the launch of the new track-ready Civic Type-R next year.

Ken Zino is an auto industry veteran with global experience in print, broadcast and electronic media. He has auto testing, marketing, public relations and communications expertise garnered while working in Asia, Europe and the U.S.
View all posts by Kenneth Zino →
This entry was posted in new vehicle and tagged autoinformed, autoinformed.com, Civic Si Coupe, Civic Si Sedan, Ken Zino. Bookmark the permalink.