In its last race in World Endurance Cup, Audi dominated Bahrain by taking the first two spots on the podium. However, the new WEC driver world champions, Romain Dumas (FR), Neel Jani (CH) and Marc Lieb (DE) in the #2 Porsche only came in sixth after contact with another car early in the race. Since Toyota had another hapless race –Stéphane Sarrazin, Mike Conway and Kamui Kobayashi in the #6 Toyota Hybrid began the race with an outside chance of the drivers’ World Championship, but fifth place was not enough to beat the Porsche #2 team. This was enough for Porsche to take the Drivers title after securing the maker’s title two weeks ago at Shanghai (Porsche Clinches WEC Manufacturer’s Title at Shanghai).

The 5.412-kilometer-long Formula One track in Sakhir was the third of nine WEC races this year to be held partly in the dark – after Le Mans and Austin. After taking the pole position in qualifying, the Audi R18 diesel hybrid sports car went on to claim a flag-to-flag victory at the 6 Hours of Bahrain. In addition, Lucas di Grassi set the fastest race lap. Thus, Audi clinched the second-place titles in the manufacturers’ and drivers’ classifications.

Audi’s Lucas di Grassi/Loïc Duval/Oliver Jarvis (BR/F/GB) in #8 took the lead from the start. Towards the end of the first third of the race, the sister car, #7, of Marcel Fässler/André Lotterer/Benoît Tréluyer (CH/D/F) clearly caught up, temporarily taking the lead, but subsequently dropped back again due to issues with a wheel gun during a tire change. Number 8 took the lead again and on lap 104 was the only top team to gamble on a pit stop during a full-course yellow. This move paid off and combined with setting good lap times, including the fastest race lap by Lucas di Grassi, #8 took advantage. Even an unscheduled stop on lap 149, during which the team had to remove rubber pickup from various body parts, did not hurt the team. ­ 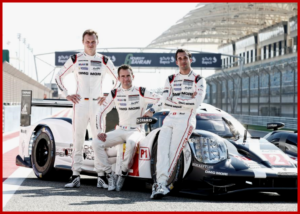 For the second consecutive year, Porsche won it all in the FIA World Endurance Championship: victory at Le Mans, winning the manufacturers’ world championship in Shanghai and now again the drivers’ world championship at the finale in Bahrain. In the last of nine WEC rounds in 2016 Timo Bernhard (DE), Brendon Hartley (NZ) and Mark Webber (AU) came third, having started second on the grid with their Porsche 919 Hybrid. The new world champions, Romain Dumas (FR), Neel Jani (CH) and Marc Lieb (DE) only placed sixth after contact with another car early in the race.

Toyota’s results from the nine-race season stands at only one win, seven podium finishes and 229 points with the TS050 Hybrid, thereby earning third position in the manufacturers’ World Championship. When the chequered flag fell, Sébastien crossed the line in fourth place, a lap behind the winning Audi #8. Mike followed 38.685 seconds later to complete a frustrating weekend and season. The team’s focus will now switch to 2017 preparations, with an intense pre-season testing schedule to fine-tune an updated Toyota TS050 Hybrid in time for the opening race, at Silverstone on 16 April.

Ken Zino is an auto industry veteran with global experience in print, broadcast and electronic media. He has auto testing, marketing, public relations and communications expertise garnered while working in Asia, Europe and the U.S.
View all posts by Ken Zino →
This entry was posted in racing and tagged autoinformed, autoinformed.com, endurance racing, Ken Zino, WEC Bahrain. Bookmark the permalink.