Posted on 5 December 2016 by Kenneth Zino 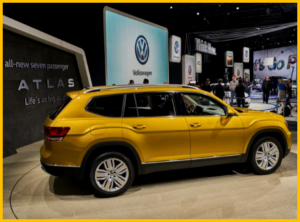 The 2018 Volkswagen Atlas, a seven-passenger sport utility vehicle, might add some sales oomph for VW – if it has the ad money – with ruinous civil and criminal settlements pending for its diesel emissions fraud – to break into a crowded segment that it has never been in before.

Once again demand for light trucks with a boost from Black Friday deals made US November auto sales strong, setting up a potential all-time record for 2016 after the one set in 2015. Light trucks in November increased sales by 8.5% to 850,00 from a year ago, offsetting the ongoing decline in passenger car sales at 531,000 or -3.1%. All tallied, US sales of light vehicles at 1.38 million increased a total of 3.7%.

Of note, is the ongoing struggle of the Volkswagen brand mired in the Dieselgate scandal. The Golf was down 11,894 ytd – off -34%. All VW nameplates were down -10% in what remains a booming market.

AutoData says the seasonally adjusted annual rate (SAAR) in November was 17.87 million units compared to 18.25 million units a year ago. Year-to-date, automakers have sold 15,859,922 vehicles, 20,139 more than November in 2015. If year-end sales beat last year’s numbers, 2016 will mark the first time in nearly a century that auto sales rose for seven consecutive years – all under the Obama Administration.

There were no surprises on the all-important Top Ten Seller list that takes up 25% of all U.S. vehicle sales. Once again Ford F-Series, Chevrolet Silverado and FCA’s Ram pickup trucks occupied the first three place. However, that was it for the Detroit Three, the balance of the Top Ten were all offshore brands.

Starting with number 4, the Toyota Camry was the most popular car for the month. The Camry was joined by the RAV4 in fifth place and Corolla (seventh place).

Three Honda nameplates also were top sellers for the month. The Honda Accord had a sixth-place finish, while the CR-V SUV fell to ninth place from fourth place in October at 26,000. The Civic finished out the month in tenth place. In eighth place, the Nissan Rogue finished the month with sales up 18% from November 2015. Continuing against the industry trend, Honda car sales helped the brand to a new November record. Fit and Accord led the way for Honda cars, with strong support from Civic. Honda truck sales maintained strong momentum with a new November record as HR-V jumped in triple digits and both CR-V and the new Ridgeline had strong sales performances

“December is historically a great month for auto sales,” said American International Automobile Dealers Association President Cody Lusk. “Thanks to a stabilized industry and promising economic conditions, international brand dealers are coming off a tremendous November and looking to close out 2016 on a high note.”

1 Response to November US Auto Sales Strong. Another Record Year?