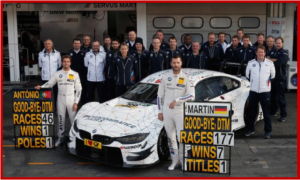 BMW Motorsports is changing its teams for the 2017 season to realign in preparation for its 2018 involvement in FIA World Endurance Cup racing. BMW Team RMG and BMW Team RBM will continue to battle for points and wins in the DTM, aka German Touring Car. Both teams have been successfully competing in this series since the brand’s return in 2012.

BMW also competes in the roughly equivalent Le Mans GT class in North America –  the IMSA WeatherTech SportsCar Championship. However, BMW runs in the GT class – as does Ford and Porsche –  not the top prototype class. What FIA class it will run in is unclear. There is speculation that BMW will compete in the top LMP1 class.

RMG, headed by team principal Stefan Reinhold (DE), took the team championship in 2014 and has two drivers’ titles with Marco Wittmann (DE) in 2014 and 2016. The 2017 drivers will be announced on 9 December at the BMW Motorsport Season Review in Munich. The BMW Motorsports customer racing program will continue as in 2016 with the Schubert Motorsport and ROWE Racing teams.

During 2017, BMW Team MTEK will start “intensive preparations” for BMW’s entry into the FIA WEC in 2018. Ernest Knoors (NL) and his team competed in the DTM between 2013 and 2016, including the first DTM win for Timo Glock (DE) in the last race of the 2013 season. Last season, the crew from Garching (DE) won the “Best Pit Stop Award” for the fastest pit stops of any team. Plans for next year foresee that BMW Team MTEK will complete a comprehensive test and development program in preparation for the WEC entry of BMW.