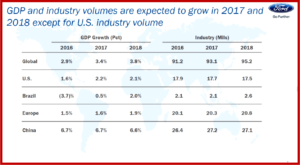 Ford Motor Company (NYSE: F) says it is on track for a good year in 2016, and predicts it will post ~$10.2 billion in pre-tax profit when results are made public next month. Ford’s Board of Directors declared a 2017 Q1 dividend of $0.15 per share and a $200 million “supplemental cash dividend” of $0.05 per share. This adds to $0.20 per share of dividends on the company’s common and outstanding Class B shares – vital of course to the surviving Ford family members.

The Ford Q1 regular dividend is at the same level as the dividends paid in 2016 – disappointing in AutoInformed’s view during a record year of U.S. and global vehicle sales. (see US Auto Sales at 17.5 Million Set New Record in 2016)

During Q3 of 2016 – the last SEC legally required quarterly filing – Ford Motor sales, revenue and profits declined compared to the same period year-over-year during 2015. (Ford Motor Company Posts a Weak Q3 Profit of $1.4B. Profit, Sales and Revenue – All Were Down) Ford net income of $1 billion was off a breathtaking -$1.2 billion from 2015. Total Ford Motor adjusted pre-tax profit of $1.4 billion was down -$1.7 billion. Yes, that’s with a B. Earnings per share at $0.24 were down -$0.3. In the strong North American market – Ford’s key segment – its wholesale volume dropped -11%, and revenue was down -8% from the same period last year.

The bad news is that the ongoing increase of incentives, longer loan terms, growing sub-prime lending – including on trucks – and the fact Ford can’t give away a car in the U.S. is potentially troubling. Helped by incentives of more than $8,000 at year end, the Ford F-Series pickup retained its title as the best-selling vehicle in the land at 820,799. Predicting lower performance for 2017 is a warning that won’t help Ford Motor’s already weak share price.

“As we close 2016, Ford continues to be a solid investment with attractive upside on emerging opportunities,” claimed Mark Fields, Ford president and CEO, who has been criticized for FMC stock languishing in the $12 range. Ford set record earnings during 2015,  but its stock – trading then in a 52-week range of $11.02 – $15.84 – continues to languish as investors remain wary of the company. It is trading today at less than $13 per share.

The Ford Motor results are also troubling for what is a record year for global and U.S. sales (November Global Light Vehicle Sales Soar to 98.5 Million, and US Auto Sales at 17.5 Million Set New Record in 2016).  The Ford Q1 regular and supplemental dividends are payable on 1 March 2017 to shareholders of record at the close of business on 20 Jan. 2017. Ford claims the company will make distributions totaling about $2.8 billion in 2017. By year-end, cumulative distributions to shareholders will total $15.4 billion since the company’s regular dividend was restored in 2012 as it emerged from the Great Recession.