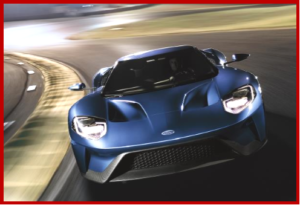 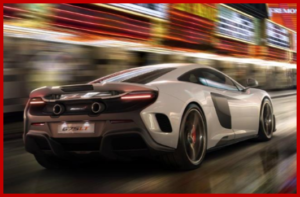 Ford claims a stout power-to-weight ratio (true, but Ferrari’s 133 bhp per liter is a world record) coupled with the “most advanced active suspension system” in the segment (maybe) gives Ford GT the edge in lap times versus the competition. Ford’s marketing problem is its V6 engine versus the throaty roar of the V8 engines of the Ferrari (click to hear it)  and McLaren. Ford Performance will now race the Ford GT in both IMSA and World Endurance Championship (WEC) series events for four years. With a class win at Le Mans in 2016, this took a decision? No racing organization would set up an expensive endurance program like this – six cars – to run just one or two years. Now the heat is on to sell production versions at potentially huge profits.

“Our expectation has always been that the EcoBoost V6 would perform exceptionally well in the Ford GT – both in terms of power as well as aerodynamic efficiency,” said Dave Pericak, global director, Ford Performance, who of course was paid to say that. “We tested and developed this powertrain through the Daytona Prototype race car that ran in IMSA for two seasons, last season racing with Ford GT. We are extremely pleased with how it performs, both on the track and on the road.”

Ford GT’s dry weight is just over 3,000 pounds, which places the supercar between its two primary competitors, as noted, the McLaren 675LT and the Ferrari 488 – both thoroughbreds from firms with long racing backgrounds – much longer than Ford’s in this rarefied segment of rare, super expensive production cars (Starting at: Ford ~$400,000, Ferrari $245,00 but rapidly rising, McLaren $349,500, but beware pricing in this segment is flexible). Ford GT’s power-to-weight ratio is 4.72 pounds/horsepower.

Ford GTs raced to class wins at Le Mans and numerous other tracks in both IMSA and WEC last season. The production Ford GT shares some of the parts of the high-performance track version, with advanced aero and suspension designed for the road.

The Ford announcement comes as the McLaren 570S GT4 is about to make its North American competitive track debut this weekend at Daytona International Speedway, as the first customer-run examples of the latest GT model from McLaren take on the four-hour Continental Tire BMW Endurance Challenge. Today, Thursday’s Rolex 24 qualifying runs – the big dogs – from 3:10-4:40 pm, followed by night practice from 7-8:30. Also Thursday will be qualifying from 5:30-6 for Friday’s four-hour BMW Endurance Challenge, the first race of 2017 for the production- car based Continental Tire Sports Car Challenge.

Six McLaren 570S GT4 are set to contest the championship throughout the 2017 season, which begins at the 3.5-mile circuit in Florida. Customer teams VOLT Racing, C360R and Motorsports in Action will each run a pair of cars in the CTSC Grand Sport (GS) class. The category has attracted arguably the world’s best GT4 outfits, and has 20 cars on the entry list for the season-opening race.

This debut this weekend for the McLaren 570S GT4 continues the long-standing tradition of McLaren sports cars racing in the U.S., which dates to 1966. McLaren has fielded cars in the Can-Am, the FIA GT Series and most recently the Pirelli World Challenge, securing multiple race wins and championship titles since Bruce McLaren’s Can-Am debut (Irony: he was once a Ford factory driver).