Toyota Research Institute Autonomous Vehicle 2.0 Shown at Prius Challenge. This One is Engineered by Toyota 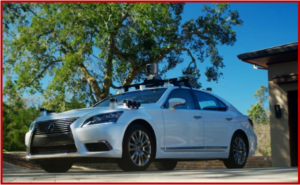 A lot of industry work going on to make the ugly sensors smaller or invisible.

The autonomous vehicle systems are costly and computationally complex, centering deeply on machine vision and machine learning. The layered and overlapping LIDAR, radar and camera sensor array reduce the need to depend too heavily on high-definition maps – especially for near-term systems, which will be designed for use in areas where such maps don’t yet exist or are inadequate because the are not detailed enough.

That’s the reason automakers are turning to mapping companies to develop their own maps. Public signs are inconsistent, wrong, or non-existent, and often are not up to date for hazards such as construction zones. (BMW Group, Mobileye to Crowd Source Digital Maps for Autonomous Vehicles, Chinese Amap to Offer Free HD Maps to Automakers)

Toyota’s work on autonomous vehicles in the United States began in 2005 at its technical center in Ann Arbor, Mich.  The company secured its first U.S. patents in the field in 2006.  Per a report last year by the Intellectual Property and Science division of Thomson Reuters, Toyota holds more patents in the field than any other company.

The platform is the second generation of the advanced safety research vehicle first revealed to the public by Toyota at the 2013 Consumer Electronics Show. It is built on a current generation Lexus LS 600hL, which has a drive-by-wire interface. The 2.0 is designed to be a flexible, plug-and-play test platform that can be upgraded continuously and often, according to Toyota. Its technology stack will be used to develop both of TRI’s core research paths: Chauffeur and Guardian systems. (Driving the 2013 Lexus LS 460, F Sport and 600hL Flagship Sedans)

Guardian is a high-level driver assist system, constantly monitoring the driving environment inside and outside the vehicle, ready to alert the driver of potential dangers and stepping in when needed to assist in crash avoidance.

“Basically, it is a smart vehicle designed to get smarter over time,” said TRI CEO Gill Pratt. “It will learn individual driver habits and abilities and will benefit from shared intelligence from other cars as data gathering, sharing and connectivity technologies advance.  We believe Guardian can probably be deployed sooner and more widely than Chauffeur, providing high-level driver-assist systems capable of helping mitigate collisions and save lives, sooner rather than later.”

Toyota’s approach to Automatic Emergency Braking is similar to other automakers. It will be standard equipment on nearly every model and trim level of Lexus and Toyota vehicles in the US by the end of 2017, five years ahead of NHTSA’s 2022 target date. (Ten Carmakers to fit AEB – Auto Emergency Braking – on New Vehicles as Standard Equipment)

The Prius Challenge held today brings together a group of entrepreneurs, technologists and Silicon Valley automotive enthusiasts to engage with the Toyota Research Institute while having some fun at the Sonoma Raceway.  The goal: to increase dialogue and build a community around the topics of mobility, data science, artificial intelligence and robotics.

Toyota Research Institute is a wholly owned subsidiary of Toyota Motor North America under the direction of Dr. Gill Pratt. The company, established in 2015, aims to strengthen Toyota’s research structure and has four initial mandates: 1) enhance the safety of automobiles, 2) increase access to cars to those who otherwise cannot drive, 3) translate Toyota’s expertise in creating products for outdoor mobility into products for indoor mobility, and 4) accelerate scientific discovery by applying techniques from artificial intelligence and machine learning.

TRI plans to employ approximately 250 employees and is based in the United States, with offices in Stanford Research Park in Palo Alto, CA (TRI-PAL), in Kendall Square in Cambridge, Massachusetts (TRI-CAM), and in Ann Arbor, Michigan, near the University of Michigan campus (TRI-ANN). For more information about TRI, see www.tri.global.