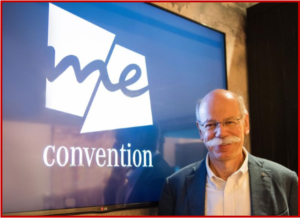 In the latest move that continues the trend of automakers abandoning auto shows in the ongoing by international  brands, Mercedes-Benz is using Texas-based South by Southwest to run an off-site “me Convention” during the – gulp – International Motor Show in Frankfurt (IAA) this September 2017. The idea in Mercedes marketing minds is to “give fresh momentum to the public debate on relevant future issues.

This follows Chrysler Abandoning Auto Shows in its home town show in Detroit in favor of significant a product intro at the Consumer Electronics Show, or Ford Holding a press preview for its new Expedition days before the Chicago Auto Show, and them sending out a press release saying there would be no press conference in the Windy City in effect ongoing Ford practice of Abandoning Auto Shows. (Chrysler Portal Concept, Millennial Family Wheels, New at CES, FCA Launches New 2017 Chrysler Pacifica Hybrid, Chevrolet Bolt – Rerun Debut at NAIAS after CES)

The “me Convention” will take place from September 15 to 17 in the Festhalle Frankfurt, the traditional location for the Mercedes-Benz IAA motor show press conference What differs is the length of the program competing directly with the home team show of Mercedes Benz. The daytime convention will have music and other events throughout the city.

“Mercedes-Benz is excited to work with SXSW to create a brand new, future-focused event in Germany. With this unique conference, Mercedes-Benz goes far beyond the bounds of traditional motor shows and invites the participants to an exchange of knowledge, opinions and thoughts,” claimed Dieter Zetsche about the new endeavor.

The “me Convention” is said to offer an open platform for creative people from many different fields, with the focus on dialogue, interaction, networking, and entertainment. Content at the “me Convention” will cover relevant issues for building the future. Tickets for the three-day “me Convention” go on sale later this spring

Together with SXSW, Mercedes-Benz has identified five relevant themes along its future strategy CASE (Connected, Autonomous, Shared and Electric):

The motto of the convention is: #createthenew.

Visitors as Participants at Trade, Not Gawkers at Auto Shows

The “me Convention” is claimed to be part of the consistent advancement of the trade show presentations of Mercedes-Benz, as other automakers who are flying like a flock of crows to experiential marketin, a journey that eschews auto shows. Mercedes is present not only at the old-style auto shows but is migrating to tech and lifestyle platforms such as the Consumer Electronics Show (CES) in Las Vegas, the Mobile World Congress (MWC) in Barcelona, and at the featured speech with Dr. Zetsche at South by Southwest (SXSW) in Austin (you never get fired by putting the client on stage – ask Frank Perdue).

Ken Zino is an auto industry veteran with global experience in print, broadcast and electronic media. He has auto testing, marketing, public relations and communications expertise garnered while working in Asia, Europe and the U.S.
View all posts by Ken Zino →
This entry was posted in marketing, news analysis and tagged autoinformed, autoinformed.com, experiential marketing, iaa frankfurt, Ken Zino, me Convention, mercedes-benz, SXSW. Bookmark the permalink.