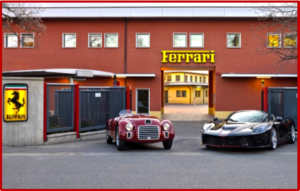 On 12 March 1947, Enzo Ferrari started his 125 S, the first car with his moniker, for a test-drive on the streets of Maranello, thereby starting a tradition that resulted in what is now Ferrari’s 70th anniversary. The tiny factory matured into an internationally-renowned made in Italy symbol, and a sports and formula racing powerhouse. Exactly 70 years later, on Sunday 17 March 2017, Ferrari launches official merriments for this milestone.

To honor the events of 70 years ago, Ferrari is releasing a video featuring with a re-enactment of the first 12-cylinder to have the Cavallino Rampante on it, the 125 S, driving through the factory gates on Via Abetone Inferiore and, in doing so, symbolically passing the baton(electronic shifter is more like it) of the Ferrari legacy to the LaFerrari Aperta. A website www.ferrari70.com site is now online.

The 125 S was the first Ferrari badge. Its 12-cylinder engine, was designed by Gioacchino Colombo with Giuseppe Busso and Luigi Bazzi also worked on the project. On March 12 1947, the 125 S, still an unbodied steel rolling chassis, ran  for the first time. Two months later, on May 11 1947, the car made its track debut at the Piacenza Circuit. At the wheel of the 125 S (the S referring to its sports car-type bodywork) was Franco Cortese.

Enzo Ferrari dubbed this first race as “a promising failure” after the car was forced out with a fuel pump problem while leading. However, that moment was short-lived. Nine days later on 20 May, Franco Cortese drove the 125 S to victory in the Rome Grand Prix, completing the 40 laps of the circuit – 137 kilometers –  at an average speed of 88.5 km/h. This was the first of six victories the 125 S delivered in 1947, the most notable of which – maybe – was the Parma Grand Prix with Tazio Nuvolari doing the driving.

Technological excellence, performance, style, exclusivity – Ferrari’s core values are represented by the car launched to mark the 70th anniversary of the foundation of the company. The LaFerrari Aperta is a new limited-edition special series model. There is also a spider version of the LaFerrari supercar.

Maranello’s latest supercar has extraordinary performance with open-top driving. It is equipped with the same hybrid power unit as the coupé: an 800 cv (horsepower) 6.2-liter V12 engine (specific power output of 128 cv/l, compression ratio 13.5:1) coupled with a 120 kW electric motor for a total power output of a 963 cv.

During 2017, more than 60 nations will host events as part of the “Driven by Emotion” concept, one of the cornerstones of the Ferrari story. Driven by Emotion is a tribute to the importance placed by the Cavallino Rampante on emotion throughout the last 70 years: be it in terms of a rewarding driving experience, acknowledged styling, or innovation technological solutions revealed by each new Maranello model.

The anniversary celebrations culminate in Maranello on the weekend of 9-10 September , but will also be flanked by other initiatives paying homage to Cavallino Rampante history, not least special exhibitions and the first “Cavalcade Classiche.”