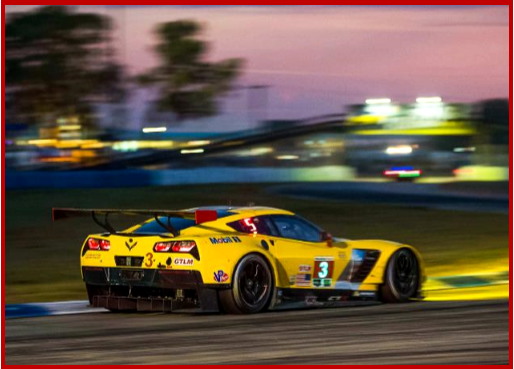 There’s a reason why factory teams field multiple car entries in sports car endurance racing as was amply demonstrated last weekend during the Twelve Hours of Sebring. And it also come about last year at the Twelve Hours of Sebring. In 2016, the No. 3 Corvette crashed spectacularly, ending up 41st overall in the 48-car field. But the No. 4 Corvette team car took the GT Le Mans (GTLM – production based cars, sort of) class win.

This year, at the 65th Twelve Hours of Sebring, the racing gods reversed the roles: The No. 4 Corvette finished 46th – that’s last place – after cooling issues that couldn’t be solved sent the car to the trailer. That left the No. 3 Corvette running against the Ford Chip Ganassi team that sent three Ford GTs to Sebring, hoping to complete their string of  top endurance race wins – the 2016 24 Hours of Le Mans, the 2017 Rolex 24 at Daytona, and now the Twelve Hours of Sebring.

The Ford GTs posted faster lap times than the Corvette, as did one of the two new Porsche 911 RSRs. However, this is endurance racing. Speed matters. Who is leading on the last lap is decisive.  Caveat – speed in the pits can be a big help, and with four classes  of cars on the track, traffic is a large factor as well.

The No. 4 Corvette’s last pit stop was a demonstration of crew determination and the excellence that come from years of practice. They placed the car out in front of the rest of the field. Driver Antonio Garcia, who shared the car with regular driver Jan Magnussen and guest driver – translation:  a helmeted Paladin: have pace, will travel – Mike Rockenfeller, drove a fast final-stretch.

The always gracious Magnussen and (heretofore unknown to AutoInformed) Rockenfeller both emphatically signaled out Garcia’s performance as a key to the win.

“Antonio drove a Superman stint at the end,” Magnussen said. “After the sun went down and the track cooled, we picked up the pace, and Antonio made the most of it.” Garcia said that last year’s crash was fresh in his mind, and he was determined to exorcise it. “I just put my head down and went for it,” he said.

The No. 4 Corvette’s margin of victory was 4.43 seconds over the second-place car in the IMSA WeatherTech Championship’s factory-backed GTLM class as in FIA LeMans, the No. 66 Ford GT of Joey Hand, Dirk Mueller and guest driver Sebastien Bourdais, fresh from an IndyCar win last weekend at the Grand Prix of St. Petersburg.

The victory for the Corvette was satisfying – the No. 66, with those three drivers, was the car that won at Le Mans last year and Daytona this year. Third was the No. 62 Risi Competizione Ferrari 488 GTE of Toni Vilander, Giancarlo Fisichella and James Calado. Fourth and fifth were the two Ford GTs – the No. 67, followed by the No. 68. Sixth was the No. 25 BMW Team RLL BMW M6 GTLM, seventh was the No. 911 Porsche 911 RSR. All seven cars were on the lead lap.

In GT Daytona (GTD), it was also a close hub-to-hub battle. The No. 33 Riley Motorsports Mercedes AMG GT3 won, the first for Mercedes at the Twelve Hours of Sebring in 60 years. Yes, 60. (Three New 2017 AMG GT Models on Sale) The Mercedes new AMG GT3 just joined the WeatherTech Championship at Daytona, though the car has an extensive race history overseas. Driver and team principal Ben Keating, who shared the car with Jeroen Bleekemolen and Mario Farnbacher, has been racing Dodge Vipers, but with the company discontinuing production of the Viper, Keating had to find a new car, and he’s pleased with his choice.

It was the first win at the Twelve Hours of Sebring for Keating and his team, and it was sweet.

“We won the 2015 11 Hours and 56 Minutes of Sebring in 2015,” Keating said, “But our engine didn’t make it to the end.” Even worse was 2014, when Keating was driving his Viper early in the race and it caught fire, and practically burned to the ground. “We were third at Daytona, and first here, so we’re batting a thousand on podium finishes so far,” he said.

Second in the GTD class was the team that won Sebring last year, then went on to win the season championship: The No. 63 Scuderia Corse Ferrari 488 GT3 driven by Christina Nielsen, Alessandro Balzan and Matteo Cressoni. Third was another Mercedes – the No. 75 SunEnergy1 Racing car, driven by team principal Kenny Habul, Boris Said and Tristan Vautier. On Friday Vautier qualified the car on the pole – a major accomplishment for a brand-new team in a new car. Early in the race the No. 75 fell back, but rallied at the end for a podium finish.

That third-place trophy almost went to the No. 16 Change Racing Lamborghini Huracán GT3, but it ran out of gas on the very last lap and ended up 11th in class.

The No. 28 Alegra Motorsports Porsche 911 GT3 R that won the 24 hours of Daytona  finished 10th in class, and was never a factor.

The GT Le Mans and GT Daytona classes move on to a completely different track than Daytona and Sebring – the comparatively tiny 1.97-mile street course at the BUBBA burger Sports Car Grand Prix at Long Beach coming up.

Ken Zino is an auto industry veteran with global experience in print, broadcast and electronic media. He has auto testing, marketing, public relations and communications expertise garnered while working in Asia, Europe and the U.S.
View all posts by Ken Zino →
This entry was posted in marketing, racing and tagged 2017 Sebring 12 hours, autoinformed, autoinformed.com, corvette c7.r, Ken Zino, Twelve Hours of Sebring. Bookmark the permalink.