Mark Fields Out, Jim Hackett in as Ford Motor CEO 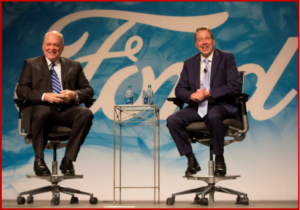 Jim Hackett, 62, was named today as Ford Motor Company president and CEO, succeeding Mark Fields, 56, “who is retiring” after 28 years at the Dearborn-based vehicle maker.

Hackett, who will report to Executive Chairman Bill Ford, led Steelcase’s turnaround to become the world’s largest office furniture maker during a 20-year career in Western Michigan, the football player also served briefly as interim Athletic Director at the University of Michigan.

Hackett led Ford Smart Mobility – arguably the future of the industry with ride sharing, electric vehicle, sales of big data and autonomous cars thrown in –  since March 2016. Ford is far, far, far behind the industry here, and needs to make partnerships or buy companies. He served on Ford’s board from 2013 to 2016. No word on whether he will redecorate Fields’ office with Steelcase regalia.

Fields had a brief three-year tenure as Ford CEO. This follows a pattern of his rocket-boosted career there, and maybe that is a key issue. The most recent were brief stints at Mazda. He left it better off, but ultimately there was a messy divorce between Ford and Hiroshima. (I argue that both culturally divided sides lost.)

Fields then he tried to clean up after the former BMW executive Wolfgang Reitzle presided over a disaster at PAG – the Premier Automotive Group a subsidiary of Ford established in 1999. Here, both execs had plenty of negative help from the people at the upscale brands steaming that an ‘Merican car company took them over. Aston Martin, Jaguar, Land Rover and Volvo have long been sold off after titanic losses. What remains is a struggling Lincoln brand where the best-selling vehicle is the bottom of the line MKX, a compact SUV that is a derivative of the Ford Edge. Here, too, it could be argued – less convincingly perhaps – that he didn’t have enough time to implement his business plan.

Mulally was known as a team builder and a problem solver, not a bureaucrat. However, Mulally was – to put it politely – not a car guy – the product line and product development languished. Think about it: What is Ford known for except trucks? And these would-be large gas-guzzling trucks that can’t be sold globally with an impending slowdown in sales more than possible.

When Fields took over Ford stock was in the $17 range. In the Machiavellian world of Ford Motor politics, Mullaly, too, retired six months earlier than anticipated for unstated reasons, even though he was credited with taming the infighting,  and building momentum.

With seven straight years of growing sales, Field at his departure was riding what could be the back end of a seven-year Tsunami sales wave, but Ford market share was basically stagnant with its shares declining from a weak ~$17 a share to where it sits at the bottom of the Atlantic Ocean today at ~$11. In a strong market, Ford’s Q1 2017 profits spiraled down by -35 %. Ford says it will make $9 billion this year, minus $1.4 billion from 2016.

This hardly makes for a convivial cocktail party at Board of Directors meetings, to say nothing of name-on-the Glass-House Ford family members, who have seen a -37% drop in their share prices.

The bad news is that the ongoing increase of incentives, longer loan terms, growing sub-prime lending – including on trucks – and the fact that the Detroit Three can’t give away a car are all potentially troubling, if not deadly. Helped by incentives of more than $8,000 per pickup at year end, the Ford F-Series retained its crown jewel title as the best-selling vehicle in the land at 820,799 during 2016.

Bill Ford and Ford’s Board of Directors “thanked Fields for his significant contributions to the company.”

CEO Hackett, together with Bill Ford, say they will focus on three priorities: Sharpening operational execution, modernizing Ford’s present business and transforming the company to meet tomorrow’s challenges. The company is much criticized by Wall Street, which has lingering doubts about Ford’s future as the industry transforms itself into mobility and data services firms.

Bill Ford, the company’s executive chairman will now oversee the company’s government relations and communications. This newly active role for what has been a passive owner, was likely helped by the fact that another family member, Martha, took over his beloved Detroit Lions – another organization with a stunning loss record.

Mark Truby is appointed vice president, Communications, and elected a company officer. He succeeds Ray Day, a chief Fields promoter who will “retire.” One of the criticisms of Fields was his ego – he was at the head of every major Ford motor press conference here. When he was expressing displeasure at the P.R. staff at PAG, a wise old grey beard told them to plant a story about his success in the paper of his home town in New Jersey. They did, and subsequently relations improved. Therefore, ego could be a factor, however slight, with Bill Ford seething in the shadows?

Marcy Klevorn, 57, is appointed executive vice president and president, Mobility. In this role, Klevorn will oversee Ford Smart Mobility, which was formed only last year. This is late compared to other automakers. GM, as only one example: see has Maven Debuts “Elevated” Car Sharing in Baltimore or BMW and Toyota Sign Deal for Joint Fuel Cell and Battery Programs. Anyway, Ford plans to accelerate the design, building, and investing into emerging mobility services, as well as Information Technology and Global Data, Insight and Analytics. Klevorn has served as group vice president, Information Technology and Chief Information Officer since January 2017.

All three appointments are effective June 1. New leaders to succeed Hinrichs, Farley and Klevorn will be announced later.

“We are fortunate to have three dynamic and talented leaders in Jim Farley, Joe Hinrichs and Marcy Klevorn taking on greater responsibility,” Bill Ford said. “Each has a track record of driving innovation, cost efficiency and delivering results around the world. They will work closely with Jim Hackett to lead Ford’s day-to-day operations, build our brand and capitalize on emerging opportunities.”

2 Responses to Mark Fields Out, Jim Hackett in as Ford Motor CEO