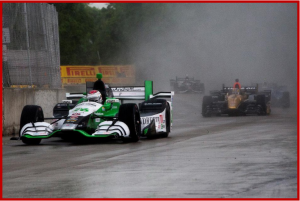 Casual observers on the blogs complaining about the wet were not sophisticated enough to appreciate how difficult racing in the rain is.

It was a slow finish to an exciting race as Carlos Munoz earned his first IndyCar victory while on pit lane at the Belle Isle Park in Detroit. A storm – one of several – caused a red flag with 47 of 70 scheduled laps of Race 1 of the so-called Chevrolet Dual in Detroit that turned into a real driver’s duel. The memorable race on the difficult 2.35-mile, 14-turn street course was called after a 20-minute wait.

It would have been the first time in my recollection that the winning car would be pushed into victory lane, but race officials wisely decided to do the podium ceremonies indoors, along with the predictably boring commercials from the drivers, so as not to muss the hair of the TV anchors. Kudos, though, to former champion open-wheel drivers Eddie Cheever and Scott Goodyear for their intelligent commentary during the race that bolstered the performances of floundering TV news readers who are not enthusiasts but were trying their best.

There were hints today – through the spray – that the electronics-ridden IRL steering wheel was being passed on to a new generation. Munoz, 23, driving for Andretti joins Carlos Huertas and Josef Newgarden as Verizon IndyCar race winners born in the 1990s. He joins Newgarden as a first-time winner this season.

A.J. Foyt Racing’s Takuma Sato – also Honda powered – dominated the early flood laps, moving into the lead on the fourth and hanging on, more accurately hydroplaning on, for 12 laps prior to the first round of pit stops. However, contact during an aggressive move with Josef Newgarden (Chevy) on Lap 18 resulted in damage to Sato’s front wing. The resulting pit stop dropped him out of contention for a victory.

Munoz, who started 20th, inherited the lead on Lap 40 when Andretti Autosport teammate Marco Andretti pitted for fuel and Firestone rain tires in anticipation of rain returning once again to the track. He picked up five positions and avoided crashing out during the early, wet stages of what was a scheduled two-hour contest. As the track dried out mid-race, Munoz moved into the lead staying on slicks, then forced his advantage as he remained on track in a light rain, when many competitors pitted for wet weather tires.

“Racing is racing, which is what happened with the weather,” said Munez. “It was a great call with the strategy and a great result for the team with a 1-2 (finish). I had the fuel to go laps longer. I wanted to get my first win by doing all the laps, but I’m really happy for my team.”

The Number 2 finisher, driving for, guess who, Andretti – was scion or third generation Marco Andretti. He led the most laps (23) to achieve his first top-three finish since the Indianapolis 500 last May. Like Munez, he ran the course on slick – literally – tires longer than just about everyone else, and was pulling away from the field even as the rain returned.

“The strategy started very early in the race. We were running eighth and we had a bunch of strong guys in the front, so it seemed like a no-brainer (to pit for Firestone slicks on Lap 9) as long as I could keep it off the fence, which we were able to do,” Andretti said. “At the end I really didn’t want to come in, but we needed to get some fuel, and I knew whoever stayed out would beat me. It was good for an Andretti Autosport 1-2 finish.”

There have been six different IRL winners this year in the seven races, and for the second consecutive race, the winner is a native of Colombia. Juan Pablo Montoya, of course, in a Chevrolet won the 99th Indianapolis 500 Mile Race last week in the sunshine.

Casual observers, in full view on the IRL blog complaining about the wet, were not sophisticated enough to appreciate how difficult racing in the rain is. This one had rooster tails almost as large as the famous hydroplane boat races held annually on the Detroit river that is adjacent to what has become a beautiful Belle Isle track on race weekends. The wet, of course, obscures driver views and forces off-line moves that are risky, as the wrecks and splintering carbon fiber demonstrated. Puddles – if you could see them – were another road hazard obscured in the grey mist.

The Detroit Grand Prix was a great IRL race because it was wet – leading to wild drivers duels.

Ken Zino is an auto industry veteran with global experience in print, broadcast and electronic media. He has auto testing, marketing, public relations and communications expertise garnered while working in Asia, Europe and the U.S.
View all posts by Ken Zino →
This entry was posted in news analysis, racing and tagged autoinformed, autoinformed.com, detroit grand prix, irl, Ken Zino. Bookmark the permalink.