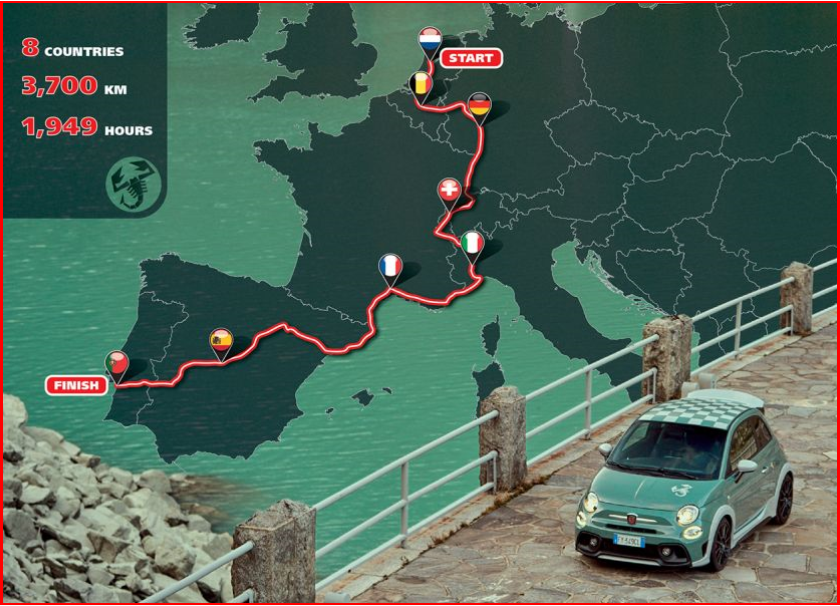 “A journey dedicated to passion for cars, to the pleasure of driving and to performance.”

After a year of celebrating the 70th anniversary of the Abarth –  born from collapse  of Cisitalia  when Abarth & Company was founded in Bologna at the end March 1949, a tour departs today from the Dutch town of Lijnden, 10 km from Amsterdam. It will go to Belgium and then Germany in early March.

From there, the Abarth 695 70° Anniversario will head toward Geneva, Switzerland, before moving to Turin – the city ​​of Abarth’s first office, which still is headquarters of the Scorpio and the Heritage HUB today, housing some of the most important cars produced by Abarth in its history. Its scorpion logo is from the founder Carlo Abarth’s zodiac sign. Fiat bought Abarth in 1971.

By late March, the “Tour of Europe in 1949 hours” will set off for the French Riviera before arriving in Spain, running past Barcelona and Madrid and finally ending up in the fascinating Portuguese city of Lisbon by mid-April. The 1949 Hour Tour will also involve the Abarth community, which currently has more than 80 clubs and 110,000 fans.

“This seems to be the best way to end a year of celebrations, alongside all our clubs and fans, Abarth enthusiasts from across Europe, who we will meet on the journey,” stated Luca Napolitano, Head of EMEA, Fiat & Abarth Brands, “a journey dedicated to a passion for cars, to the pleasure of driving and to performance.”

Ken Zino is an auto industry veteran with global experience in print, broadcast and electronic media. He has auto testing, marketing, public relations and communications expertise garnered while working in Asia, Europe and the U.S.
View all posts by Kenneth Zino →
This entry was posted in milestones, performance and tagged Abarth, Abarth Scorpio, auto industry commentary, autoinformed.com, Carlo Abarth, fca, Kenneth Zino, Tour of Europe in 1949 hours. Bookmark the permalink.