Accord Hybrid Falls Short of its EPA Fuel Economy Rating 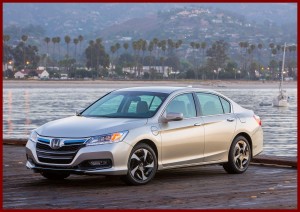 This is a serious comeback effort from what was once a company noted for its efficiency but then Honda lost its way.

Hybrid fuel economy is back in the news again as a leading testing organization reports that the new Honda Accord Hybrid mid-size car returns good overall fuel-economy, in fact tying the smaller compact Honda Civic Hybrid.

However, an independent magazine warned prospective buyers that the EPA’s figure of 47 mpg posted on the window sticker is fiction.

Nonetheless, the Accord Hybrid’s 40-mpg performance on the Consumer Reports combined city and highway tests make it a class leader for fuel economy in its class. Testers said the Accord has a “very impressive hybrid system” that smoothly transitions between battery and engine power. To save fuel, even at highway speeds, the engine shuts off as soon as drivers lift their foot off the gas pedal.

“We have found that the EPA tests often exaggerate the fuel-economy of hybrids,” says Jake Fisher, director of automotive testing at Consumer Reports.

Prior Consumer Reports tests of the Ford Fusion Hybrid and C-Max Hybrid also found significant shortfalls between the EPA’s estimated highway fuel-economy figures and those in CR’s own fuel economy tests.

Although the Accord Hybrid delivers improved fuel economy over the non-hybrid version, the Hybrid falls short in other – highly subjective and suspect – areas of Consumer Reports’ testing including ride comfort, emergency handling, and quietness. As a result, the Accord Hybrid scored lower overall in Consumer Reports’ tests than the non-hybrid four-cylinder Accord while costing roughly $6,500 more.

Consumer Reports has also tested the new hybrid version of the Subaru XV Crosstrek, as well as new diesel versions of the BMW 3 Series and Jeep Grand Cherokee.

The XV Crosstrek Hybrid was said to be a “halfhearted” effort. During light throttle starts – easy on the accelerator – Crosstrek Hybrid managed to creep up to 20 mph on electric power, but only if the outside temperature was above 50° F and the heat or air conditioner was turned off.

CR also claims this hybrid is not particularly refined. As is now common, a start/stop system shuts off the engine when drivers come to a halt, but it restarts with a shudder. This was a common problem with earlier generation hybrids on AutoInformed’s test cycle.

The standard XV Crosstrek Premium’s 148-hp, 2.0-liter four-cylinder engine helped it deliver a frugal 26 mpg overall in CR’s test. The hybrid version only improves “slightly on the drivability” of the regular one, but it averaged only an additional 2 mpg overall in Consumer Reports tests. Considering it costs about $3,000 more than the regular version, the hybrid is not worth the extra money for most shoppers

The Jeep and BMW diesels produced better numbers in Consumer Reports tests. Compared with their gasoline counterparts, they improved fuel economy by 6- and 7-mpg overall to 24 and 35 mpg, respectively—without a significant compromise in performance or refinement. With their excellent highway efficiency of 32 and 49 mpg, they provide lengthy cruising ranges of 785 and 735 miles.

Overall, both vehicles scored near the top of their classes in Consumer Reports testing.
For 2014, though, the BMW 328d’s new 180-hp, 2.0-liter turbo diesel, showed the 328i’s 28 mpg to be lacking. The 35-mpg CR averaged in the 328d, with all-wheel drive, is good In this class, that’s eclipsed only by the 40-mpg of the Lexus CT 200h hybrid, which in CR’s view doesn’t come close to the 3 Series in luxury, sportiness and size.

A 2014 freshening of the Grand Cherokee brought improved controls, better fit and finish, an eight-speed automatic transmission, and electric steering system. The optional 240-hp, 3.0-liter turbo-diesel V6 averaged 24 mpg, which is a 6-mpg improvement in overall fuel economy compared with the 3.6-liter gasoline V6. That ties the Grand Cherokee with the diesel-powered Volkswagen Touareg TDI as the most efficient non-hybrid midsized SUV.
The latest issue of CR goes on sale tomorrow.

Ken Zino is an auto industry veteran with global experience in print, broadcast and electronic media. He has auto testing, marketing, public relations and communications expertise garnered while working in Asia, Europe and the U.S.
View all posts by Ken Zino →
This entry was posted in auto news and tagged autoinformed, autoinformed.com, epa, fuel economy, Ken Zino. Bookmark the permalink.