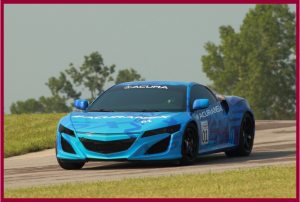 The Acura sports car will be produced at the newly established Performance Manufacturing Center in Marysville, Ohio starting in 2015.

Acura today released an image of a prototype NSX sports car, and said that the running two-seater will take to the racetrack just prior to the Honda Indy 200 IndyCar Series race at Mid-Ohio on 4 August. NBC Sports starting at 3 pm EDT will broadcast the race live.

The prototype NSX appears to have the same styling and proportions of an NSX Concept that debuted at the 2012 North American International Auto Show in Detroit. The production NSX due in 2015 will come with a mid-mounted V6 engine and a new three-motor Sport Hybrid SH-AWD  for Super Handling All Wheel Drive in marketing babble.

Last May, Honda said that the next-generation Acura sports car would be produced at the newly established Performance Manufacturing Center in Marysville, Ohio. The original Acura NSX was built at the Takanezawa plant in Japan from 1990 until production moved to the Suzuka plant in early 2004, where it was produced until 2005. Part of the Tochigi Factory, the Takanezawa plant was the first manufacturing facility in the world to mass-produce an all-aluminum body and balance advanced production equipment with hands-on “craftsman” processes.

The site for the new production facility, Honda’s third auto plant in Ohio, is only a few miles from the Honda R&D Americas that is engineering the sports car for production. The Performance Manufacturing Center also is close to Honda Engineering North America, which develops new production technologies. (2015 Acura NSX Assembly Slated For Marysville Ohio)