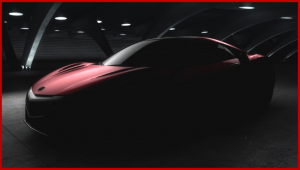 Acura released a 30-second teaser video – yawn – with a fleeting glimpse of the NSX and the sound of its three-motor, twin-turbocharged powertrain.

After an interminable number of teaser announcements, Acura confirmed today that the production version NSX makes its world debut at the 2015 North American International Auto Show in January. NSX is under development by engineers at the company’s North American R&D operations in Raymond, Ohio. The design comes from a studio in Torrance, CA. NSX will be produced exclusively and exported from Marysville, Ohio. Better still NSX will go GT racing next year.

This racing program – emulating a well-worn, rubber covered  line used by Chevrolet’s Corvette – begs the question whether the parent company of Acura, Honda  – is now more “American” then, say Ford Motor or Fiat Chrysler? Consider Honda’s heritage that includes the first Japanese production and assembly operations in the U.S. that embarrassed then far larger Toyota and Nissan. Honda’ also has a large number of locally sourced parts used in its U.S. plants.  American born Honda executives now clearly have significant say in  the parent companies operations.

The original Acura NSX was built at the Takanezawa Plant in Japan from 1990 until production moved to the Suzuka Plant in early 2004, where it was produced until 2005. Part of the Tochigi Factory, the Takanezawa Plant was the first manufacturing facility in the world to mass-produce an all-aluminum body with advanced production equipment as well as a hands-on “craftsman” process.

Acura released a 30-second teaser video – yawn – that provides a fleeting glimpse of the 2015 NSX and the sound of its three-motor, twin-turbocharged “Sport Hybrid” powertrain. You can view the video on Acura’s YouTube channel (youtube.com/Acura), but we do not recommend that you do so, since it will only encourage more such marketing hype in the future.

As to the racing, AutoInformed cannot wait…

Ken Zino is an auto industry veteran with global experience in print, broadcast and electronic media. He has auto testing, marketing, public relations and communications expertise garnered while working in Asia, Europe and the U.S.
View all posts by Ken Zino →
This entry was posted in marketing, racing and tagged autoinformed, autoinformed.com, Ken Zino. Bookmark the permalink.