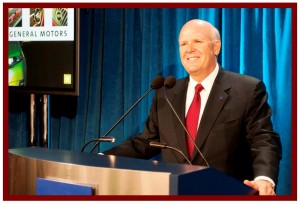 While investors were looking at the price of GM stock trading well under $30 – down from a post bankruptcy high of $39.48 – GM CEO Dan Akerson was praising the efficiency of the taxpayer bailed out company.

On the stage of the Fisher Theater in Detroit, Akerson said that “GM has gone from almost being history to making history.”

Well, yes – but the question is what sort of history is being made here? The debate, of course, is whether GM really has changed its losing ways after U.S. and Canadian taxpayers saved it from well deserved, well earned oblivion in 2009 and whether this was good use of government money.

In Akerson’s view “the bankruptcy may be seen in the future not only as a second chance but a rebirth as a 21st century global manufacturing company no longer burdened by the past.”

GM sales declined 1% in May compared to last year in GM’s most profitable market. This was led by a sharp -16% – decline in U.S. fleet sales, but discounted fleet sales at GM are still 31.7% of total sales. And May was a month that saw the removal of the Japanese from the marketplace because of production disruptions caused by the Japan earthquake and Tsunami. Shouldn’t GM have done better?

GM’s first quarter profit of  profit of $3.2 billion, or $1.77 per fully-diluted share were not as strong as it appeared at first glance because special items increased profits by $1.5 billion or $0.82 per fully-diluted share. This is bad news for U.S. taxpayers who still hold 26% of General Motors. It’s estimated that the stock must trade at about $54 a share for taxpayers to get all of their $49.5 billion in bailout money back. As it stands now, the auto bailout of GM, Chrysler, and GMAC will cost U.S. taxpayers at least $16 billion, and that’s not including the unusual granting of loss carry forward tax credits that normally would have been wiped out during the bankruptcy reorganizations of the companies – in other words – more taxpayer subsidies are in the offing.

The weaknesses at GM remain in its sales of traditional trucks, with a 110 days supply of full size pickups; it’s heavy use of incentives, which remain higher than the industry average, (but are lower than the levels that drove it into bankruptcy); and gaps in updating the product line because of delayed programs at the end of the last decade when cash was short.

The huge fuel price rises are hurting GM profitable large truck and SUV sales, the effects of which won’t be known until GM Q2 results are released.

“I believe we’re well-positioned to meet these challenges, and our team is working hard for success today, tomorrow and for many years to come,” Akerson said.