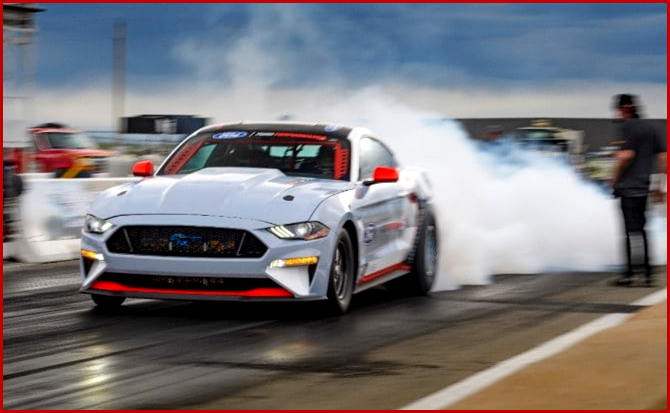 Enthusiasts should love EVs for their electric motors which provide instant torque.

By Ford’s math it’s equivalent to the combined output of more than three 2021 Mustang GT V8 engines. Developed by Ford Performance in parallel to the recently unveiled Mustang Mach-E 1400 prototype, both cars were publicizing Ford’s growing EV technologies that are currently lagging leaders such as BMW and Tesla and Daimler.

“Since revealing the car, we’ve continued to fine-tune it and now know we’re just scratching the surface of what we may be able to achieve with this much electric horsepower in a drag racing setting,” said Mark Rushbrook, global director, Ford Performance Motorsports.

Ford Performance collaborated with Cascadia Motion to power the Cobra Jet 1400. With four PN-250-DZR inverters coupled to a pair of DS-250-115s, giving four motors total and spinning at up to 10,000 revolutions per minute. The motor-inverter packages run at 800 volts and up to 700 amps, with maximum output of 350kW per motor.

AEM-EV and Ford Performance jointly developed an advanced data and control system that has a control algorithm “unique to the Cobra Jet 1400.”

The power has also required a different approach with chassis tuning strategies, which MLe, Ford’s builder for the project, has delivered with input from Ford Performance’s longtime Cobra Jet build collaborators at Watson.

“It’s been a great but challenging project for all of us at Ford Performance,” said Rushbrook.  “The opportunities to learn … gives us great insight into what may be possible in high-performance all-electric vehicles for Ford going forward.”

Ford said it is  continuing to work with NHRA to agree on how electrification can be part of the sport and to “show off the Cobra Jet 1400 at max power in due course as regulations develop.”

The U.S. Nationals provide the perfect venue to showcase the Mustang Cobra Jet 1400 where the car will first run in public this weekend. Ford NHRA Funny Car Driver Bob Tasca III will pilot the prototype in what appears to be a publicity stunt against one of Ford’s internal combustion engine Mustang Cobra Jets, winners in the NHRA sportsman ranks.

“Drag racing has always been where Detroit proves its most advanced powertrains,” said Brad Gerber, V.P. sales and chief  development officer, NHRA. “We look forward to seeing the Cobra Jet 1400 and continuing discussions with Ford about the future of electrification in drag racing.”