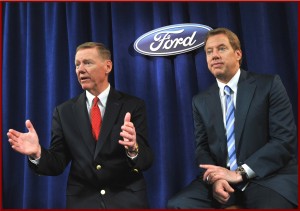 Sending a message to the non-working Ford family?

While a grand total of only 63 people bothered to attend the Ford Motor Company annual meeting of shareholders in Wilmington, Delaware today, 29.5% of Ford investors voted against Ford family control of the company through their holdings of Class B stock. The Ford family gets 16 votes per share of B. Common stockholders get one vote per share. The disparity allows the Ford family to retain control of the publicly-held automaker.

A dissident shareholder proposal relating to consideration of a recapitalization plan to provide that all of Ford Motor Company’s outstanding stock have one vote per share was rejected, but of the total of 4,420,910,286 votes cast 29.5% of shareholders – or 1,283,063,982 of them – approved the measure. Not surprisingly, management – picked by the family – was against the proposal.