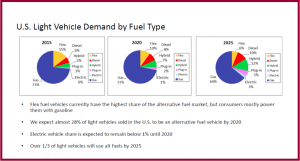 The market share of battery electric vehicles’ (BEVs) of U.S. light vehicle sales is expected to remain below 1% through 2020. If plug-in hybrids (PHEVs), such as the Chevrolet Volt and the Ford Fusion Energi are included, the share will only increase to 3% by 2020.

“There is clearly a disconnect between what the federal government and the state of California are looking to achieve and what the majority of consumers actually want,” said Mike Omotoso, senior manager of powertrain forecasting at LMC Automotive, while speaking at the CAR Management Briefing Seminars here today.

“Even with a federal tax credit of $7,500, the price premium of most electric vehicles is still too high relative to the payback period.”

Even with the low market share outlook, LMC Automotive forecasts the volume of BEV and PHEV sales to more than quadruple over the next 10 years to 250,000 units annually. Stronger demand should come from expected higher gas prices, lower costs for the Li-ion batteries and increased model introductions. The 2025 Corporate Average Fuel Economy (CAFE) target of 54.5 mpg fleet average will also force the growth of BEVs and PHEVs.

Helping here to increase the lack of buyer interest is increasing number of PHEVs. Unlike BEVs with a range of 70-100 miles, PHEVs have a range of more than 300 miles with the addition of an internal combustion engine.

LMC Automotive also says that the diesel light vehicle market that is currently dominated by heavy-duty pickup trucks and passenger cars from German automakers, with a U.S> market share of in the 3% range.

However, increases in model activity this year in other segments, including new diesel versions of the Chevrolet Cruze, Jeep Grand Cherokee and Ram 1500, will help propel diesel engines’ share of light vehicle sales to nearly 8% by 2018. Compared to the 50% share in the European market, this remains tiny, even though it more than doubles the US market share in 2012.

“You get the best of both worlds with turbocharging and GDI: the same or more power than with a larger, naturally aspirated engine, and better fuel economy,” said Omotoso.

However, the gasoline share of light vehicle sales by fuel type is expected to decrease from 90% in 2010 to 72% in 2020 as alternative powertrains gain ground over the next few years.