Posted on 1 February 2019 by Kenneth Zino 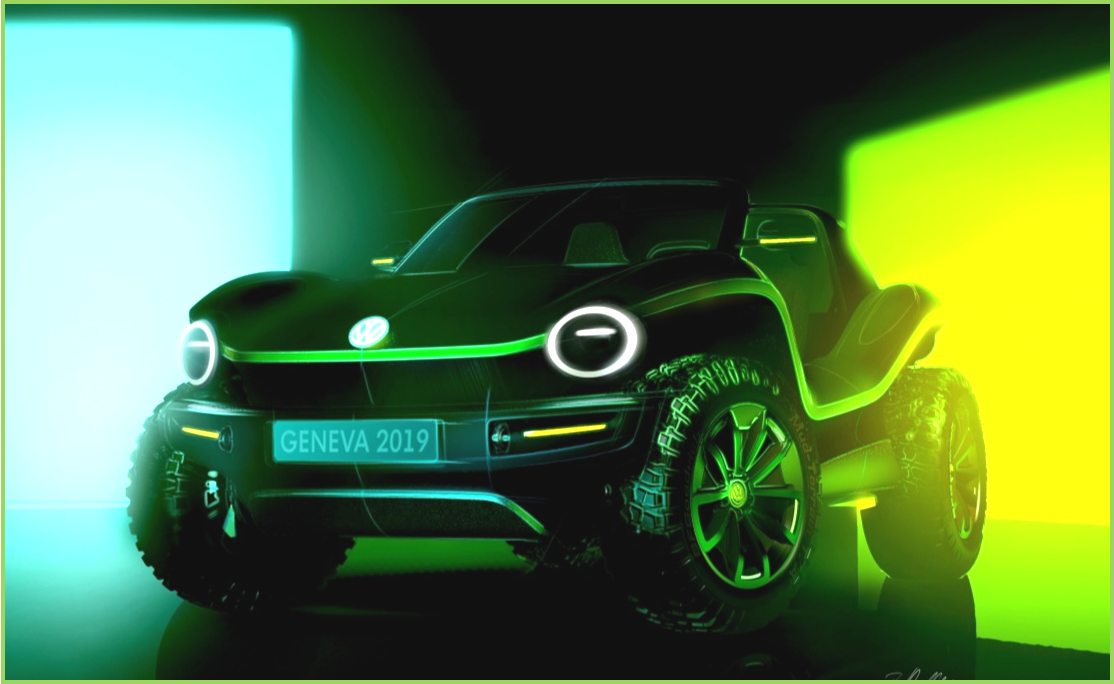 The history of recreational vehicles and Volkswagen is lengthy.

Volkswagen is revealing the first fully electric version of a new dune buggy at the Geneva Motor Show in March. Never mind the California surfing and hot rod culture wasn’t known for its alpine skiing, the Wolfsburg-based automaker says the concept vehicle is based on its modular electric drive matrix (aka MEB).

The fully electric buggy is based on the vehicles that were created in the 1960s in California. Back then, the crude Beetle chassis was the frame for these buggies. Hot rodders quickly discovered a Porsche boxer engine would easily bolt in resulting in zero-to-60 elapsed times that needed a stopwatch, not a calendar for measuring.

VW, with abundant self-interest in an EV market that is a thin as a razor blade thus far, claims that MEB is proving flexible. Well, as with the original buggies, this version of a dune buggy has no fixed roof or conventional doors. Large wheels and off-road tires and open side sills re the themes of the look.

Here comes the commercial: “The new MEB concept vehicle shows that this fully electric platform can be used for more than just large-scale series production models. Like the Beetle chassis of yesteryear, the MEB has the potential to facilitate the development of low-volume niche vehicles,” VW says. We await any production evidence that this is so. (Chattanooga to Build US VW Electric Vehicles)

The history of recreational vehicles and Volkswagen is lengthy, though. From the Beetle convertible and special bodies produced by companies such as Hebmüller and Rometsch to dune buggies such as the Meyers Manx, the Beetle chassis allowed for 250,000 individual vehicles were built as one-offs or at low volumes through to the 1980s, VW says.

The latest one-of-a-kind model, the fully electric concept buggy, will be shown for the first time at the 89th International Geneva Motor Show, from March 7-17.

Founded in 1955, Volkswagen of America, Inc., an operating unit of Volkswagen Group of America, Inc. (VWoA) is headquartered in Herndon, Virginia. It is a subsidiary of Volkswagen AG, headquartered in Wolfsburg, Germany. VWoA’s operations in the United States include research and development, parts and vehicle processing, parts distribution centers, sales, marketing and service offices, financial service centers, and its  taxpayer subsidized manufacturing facility in Chattanooga, Tennessee.