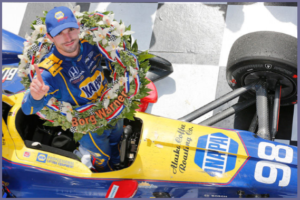 Memorial Day saw what was one of the most exciting Indianapolis 500 races since Tony George orchestrated the Indy Racing League disaster that subsumed CART, which at the time was the most competitive open-wheel racing in history. IRL has been a joke since.

At the end of 200 laps, Alexander Rossi drank the Hoosier milk in the Winner’s Circle – a gulp worth more than $2.5 million when the purse was tallied.

George, thankfully, has been long gone from Indy racing – fired by his own family after he ran the series into oblivion. Indy used to dominate the sports pages for the entire month of May. Now it’s one week of sound-bite coverage at best.

There is much irony here because Rossi was driving a Honda-powered car for Andretti Herta AutoSport –  both older racing pros with strong ties to CART in the days when open wheel racing really meant “open,”  with the associated dangers of being laucned out of control after touching another racer during close passing or running three abreast through the four turns. This isn’t the case now with shrouded wheels, a necessary 21st century safety upgrade. What is not necessary for exciting racing are the limited options that teams now have on chassis and engine choices.

Rossi, a rookie, ran his final tank of ethanol for 36 laps to take the checkered flag – sort of an EPA estimate that said it was  four laps longer than any other racer during the opening of summer run  – to win the 100th Indianapolis 500. His fuel consumption was calculated so closely that Rossi’s car was towed to victory lane after taking the checkered flag.

It is unknown if Rossi-owner, an Indianapolis patriarch and racing dynasty founder, Mario Andretti, participated in the risky decision to leave Rossi out on what turned to be a a sniff of fuel. Only fools – absent an Andretti interview – would speculate what was on his mind during the pre-race Indy pomp when “singer-actress” Lady Gaga plumper herself into Andretti’s two-seat IRL photo-op car during the warm-up. To be fair to Mario – one of the best racers I ever covered – this is a straight business-deal Honda p.r. stunt that uses a hybrid two-seat race car that this correspondent, alas, has not been strapped into.

It was a classic Brickyard 500 mile brawl. After the green flag dropped – the pace laps led by a 2017 Camaro SS driven by the legendary Roger Penske, whose Chevy-powered cars didn’t fare well. 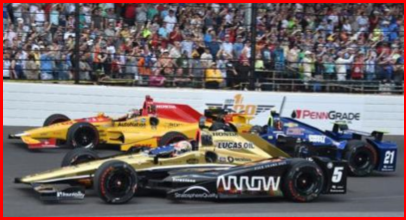 Honda pole qualifier James Hinchclife and outside front-row starter Ryan Hunter-Reay – both likely under Honda team orders – traded the lead back and forth and led all but two of the first 30 laps. This was done with smart drafting moves in clear air that helped them conserve fuel and gain speed on the field no matter who was in front.

It was an omen of how important fuel would play in the outcome.

Other Honda leaders during the race included Munoz, Townsend Bell, Bryan Clauson and Alex Tagliani. Hinchclife, you might recall, watched last year’s 500 from a hospital bed after a horrific crash during practice less than a week before the Memorial Day Classic.

The middle front row starter Josef Newgarden in a Chevrolet-powered car was left in their exhaust fumes initially, but at the end of a long, sun-shiny race, Newgarden and Carlos Muñoz were racing hard, swapping the lead every couple of laps until both had to pit for fuel.

As the Crowd Roars – Fuel was Critical

A series of crashes led most contending teams – including those of Rossi, Munoz and Tagliani – to abandon their pre-race pit strategy. Lady Luck intervened for Rossi when Takuma Sato, driving for A.J. Foyt Racing, kissed the wall on Lap 163, bringing out a yellow caution flag just short of the final pit stop window for both Rossi and Munoz.

Restarting in seventh and eighth, respectively, Rossi and Munoz moved through the field as the leaders made their final stops for a splash of fuel for the final 37 closing laps. On Lap 197 that Rossi took the lead and held it on fumes.

AutoInformed notes that  IRL should think about how their  current spec series plays down automakers and uses only two manufacturer’s engines – yes only two, and Chevy and Honda were barely mentioned during broadcast. Is this the way to increase fans? Ultimately it moves IRL closer and closer to the “pro wrestling” NASCAR has become with its lack of any sporting credibility on these pages. The decal-festooned clone cars of NASCAR – without any real difference in the machinery – is laughable.

The Indy victory was a record-extending 11th for Honda in its 16 attempts at the diminished 500 under the spec series racing of IRL. Going back to the IRL disaster of 1994, with the most wins of any autoworker – Honda leads. Rossi was one of seven Honda drivers to lead portions of the Indy 2016 race, but you would never now that from the broadcasters who are bushing about all personality without mentioning automaker involvement.

IndyCar drivers now are practicing  for a tough schedule of three races during the next two weeks, starting with  next weekend’s June 4-5 double-header with races both Saturday and Sunday on the Belle Isle street circuit in Detroit, Michigan.

Ken Zino is an auto industry veteran with global experience in print, broadcast and electronic media. He has auto testing, marketing, public relations and communications expertise garnered while working in Asia, Europe and the U.S.
View all posts by Ken Zino →
This entry was posted in racing and tagged autoinformed, autoinformed.com, cart, Ken Zino. Bookmark the permalink.