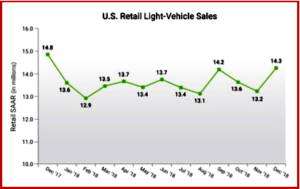 New-vehicle retail sales in December are expected to fall from a year ago, according to a forecast from J.D. Power and LMC Automotive. Retail sales are projected to reach 1,310,700 units, a 1.0% decrease compared with December 2017. Retail sales for the calendar year are expected to reach 13.9 million, a decline of 1.3% from last year; 2018 U.S. light vehicle sales are projected at 17.3 million units.

“Despite retail sales falling for the sixth consecutive month, the continued growth in transaction prices is allowing manufacturers to offset lower sales with higher revenue,” claims Thomas King, Senior Vice President of the Data and Analytics Division at J.D. Power. “Consumers are on pace to spend nearly $45 billion on autos in December, up 1% from last year and the highest level ever recorded.”

Incentives were moderate into December. Spending is expected to decline year-over-year for the sixth consecutive month.  December to-date spending is $4,098 per unit, down $164 from the same time last year. Spending on cars is down $663, while spending on trucks/SUVs is up $42.

“While 2018 marks the second consecutive year of sales declines, strong revenue and lower spending are helping to maintain profitability,” King says. “Looking ahead to 2019, a record number of truck and SUV launches will help manufacturers better align portfolios with overall demand.” Nearly 45 all-new or major re-designed vehicles are expected to launch next year, with 28 being a truck or SUV.

The average new-vehicle retail transaction price in December is on pace to reach $34,292, an all-time monthly record. The previous high for the month of December – $33,524 – was set last year.

“The combination of strong fleet volume and stable retail demand is expected to push  Next year, the auto industry will continue to face heightened uncertainty and intense competitive challenges due to conflicting macro factors, the continuing SUV/car shift and the growing number of new electric vehicles joining the market,” says Jeff Schuster of LMC Automotive. ”

LMC’s forecast for 2018 total light-vehicle sales is up slightly to 17.3 million units on a robust November performance and solid projection in December. The forecast is expected to exceed 2017 by 60,000 units.