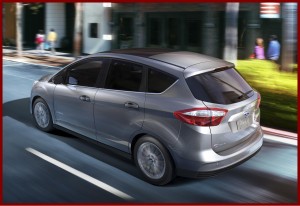 Ford originally planned to bring larger 7-passenger versions of C-Max gasoline vans to the U.S., but scaled the program back to a 5-passenger hybrid program.

Consumer Reports say that it can’t duplicate Ford Motor’s 47 city/47 highway/47 comb­­­ined mpg claim for the new Fusion and C-Max hybrids. In CR tests, the Fusion Hybrid provided 39 mpg overall, 35 city and 41 during highway conditions. For the C-Max Hybrid, CR got 37 mpg overall, with 35 and 38 for city and highway. “These two vehicles have the largest discrepancy between our overall-mpg results and the estimates published by the EPA that we’ve seen among any current models,” said CR.

Coming after the revelation that Hyundai and Kia mileage claims were off by as much as 6 mpg for their self-certified cars when actually tested by EPA, buyers who don’t understand the complexities of EPA ratings, and how automakers are optimizing calibrations for the test are bound to see that their mileage may vary. (Read AutoInformed on EPA Catches Hyundai and Kia in Mileage Rating Fraud)

When the C-max number were announced, AutoInformed raised the mileage disparity issue: “The all-new Ford C-Max Hybrid that goes on sale this fall is now EPA-certified at 47 mpg city, 47 mpg highway and 47 mpg combined. This makes it the first hybrid car without a window sticker that lists a decline in highway fuel economy ratings. Whether this is real or the product of carefully calibrating the C-Max to the EPA test cycle awaits independent verification.” (Read Ford C-Max Hybrid EPA Rated at 47 MPG in all Categories)

Ford Motor responded to AutoInformed’s query on the independent CR tests with the following statement: “Early C-MAX Hybrid and Fusion Hybrid customers praise the vehicles and report a range of fuel economy figures, including some reports above 47 mpg. This reinforces the fact that driving styles, driving conditions, and other factors can cause mileage to vary.  For those customers who are more focused on optimizing their fuel economy, Ford’s new hybrid SmartGauge with EcoGuide eco-coaching technology features even more ways – such as Brake Coach and an “Empower” gauge for more efficient stopping and acceleration – to help our customers achieve higher mileage.”

Unclear from Ford were responses to two key follow up questions:

Ford confirmed that it tested the vehicles for self-certification as happens with most vehicles. Then responded, “We will continue to work with EPA and Consumer Reports if they have any questions. The key is our customers are very happy with their vehicles, with a good number reporting fuel economy above 47 mpg.”

Ford, like all other automakers, is badly behind Toyota, which dominates the global hybrid market. Ford is hoping that the fuel economy and a base price of the C-Max starting at $25,995, which  undercuts Toyota Prius Liftback and Prius v by $500 to $1,300, will jump start sales. The roughly comparable in size Prius v is EPA rated in 2012 at 44 city, 40 highway, 42 mpg combined. The smaller Prius Liftback is EPA rated at 51city, 48 highway, 50 mpg combined. (Toyota counters that the C-Max is actually closer to the Liftback in useable space, so Ford is actually charging a premium.) Is this enough of a Ford difference to matter in the market? (Read AutoInformed on Honda Hybrid Sales Top 1 Million. 3 Million More to Catch Toyota)

CR said its overall mpg results are “usually pretty close to the EPA’s combined-mpg” rating. Among current models, more than 80% of the vehicles CR tested are within 2 mpg. The largest discrepancy CR previously reported was 7 and 6 mpg for the Toyota Prius C subcompact and Prius hatchback, respectively. CR also mirrored the observations of numerous car testers – highway mpg ratings for hybrids are often not close in real world driving. This is because hybrids are best suited for the stop-and-go traffic that most commuters experience.

“Most buyers won’t get anything near 47 mpg in the real world,” says Jake Fisher, Consumer Reports’ director of auto testing. “Even though these two Ford hybrids are very efficient, this big discrepancy may leave customers disappointed.”