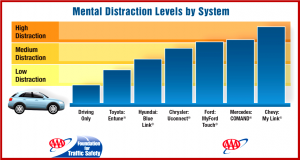 With three out of four drivers now believing that hands-free technology is safe to use, because of automaker and cell phone company propaganda and self-denial, the distracted driving problem grows each year.

MLG Automotive Law has filed a class action lawsuit against Apple seeking to enjoin the California company from selling iPhones until it installs texting and driving safeguards.

The lawsuit, Julio Ceja v. Apple Inc. (Case No. BC647057), was filed Tuesday in Los Angeles County Superior Court. The lawsuit claims that, based on data provided by the Federal Highway Administration and the California Highway Patrol, Apple’s iPhones are responsible for 52,000 automobile accidents in California each year, and an average of 312 deaths. (National Safety Council: 2015 Traffic Safety Worst Since 2007)

Julio Ceja of Costa Mesa, California was injured in an accident caused by a driver who was on her iPhone. The class action potentially concerns all California residents. It seeks to halt all iPhone sales in the state until the lock-out device is employed. Apple sells more than 500,000 iPhones a day. (Distracted Driving Update – Construction Sign) 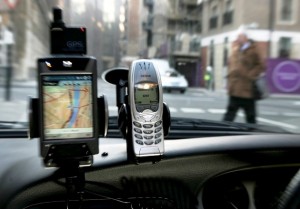 The law doesn’t make it illegal to read or write text messages.

The U.S. Department of Transportation shows that at any time about 1.5 million people are texting and driving on public roads. The National Highway Traffic Safety Administration classifies texting and driving as six times more dangerous than drinking and driving, of course. NHTSA has only proposed – thus far – voluntary guidelines to deal with the problem. In 2014, 3,179 people were killed, and 431,000 were injured in motor vehicle crashes involving distracted drivers, according to NHTSA. The numbers could be much higher since drivers in accidents are unlikely to admit cell phone use.

The lawsuit alleges that Apple puts profit before safety. Per the filing, the company has had the technology to prevent texting and driving since 2008 – it patented it in 2014 – but will not install it because it might lose market share to phone-makers who do not limit consumer use. In the last three months of 2016, Apple generated $8.5 billion in net profit. At the end of its fiscal year it had $238 billion of cash on hand.

“Texting and driving has become one of the most serious issues that confronts all of us on a daily basis,” said Jonathan Michaels, the founding member of MLG Automotive Law. “The number of people who have been being killed or injured is astonishing. It has to stop.” Michaels continued, “Legislating against drivers will unfortunately not solve the problem. The relationship consumers have with their phones is just too great, and the ability to slide under the eye of the law is just too easy. Embedding lock-out devices is the only solution.”