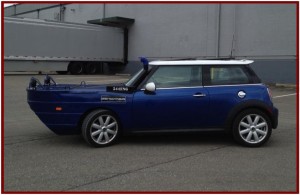 The latest BMW press release from Mini on 1 April 2012 says that Mini customers will be able to boldly go (sic) where no motorer has gone before when the all-new Mini Cooper Yachtsman makes its world premiere at the New York International Auto Show this week, right beside the Hudson River.

“Designed to bring MINI ownership to people who regard the 70 percent of the earth’s surface covered by water as their home, the new MINI Cooper Yachtsman is a corner-carving crustacean that promises go-kart-like handling and a sensational combination of amphibious and landphibious performance both on and off the water.,,” the release claimed… <grin>