Posted on 4 September 2013 by Kenneth Zino 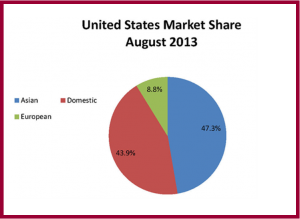 While the pickup truck segment dominated by the Detroit Three exploded during August, Asian brands ruled in the crucial and larger car market. Honda, Nissan, and Toyota led all automakers with double-digit August sales gains here. Leasing was also up, comprising 27% of all sales in Q2 compared to 24% during the same period last year. Overall, offshore brand sales in the U.S. rose to 843,588 vehicles, up from 750,254 last month and well above 703,611 a year ago.

Helped in part by the long Labor Day weekend that fell in August, Honda and Nissan both set August sale records, up 29.1% and 24.3% respectively compared to August 2012. Toyota reported a 22.8% increase and knocked Ford Motor out of its traditional Number Two U.S. sales slot for the second month running. As a result, offshore brands continue to dominate the U.S. auto market with a 56.1% share in August, a slight decrease from the 57% share they held in July. Nevertheless this was up from the 54.7% share they held in August 2012.

Detroit Three brands, if you consider Turin-based Fiat’s control of the Chrysler Group as domestic, finished the month with 43.9% of the U.S. auto market with sales of 581,591 units. Last month, they occupied 43% of the market and sold 564,940 vehicles.

Ken Zino is an auto industry veteran with global experience in print, broadcast and electronic media. He has auto testing, marketing, public relations and communications expertise garnered while working in Asia, Europe and the U.S.
View all posts by Kenneth Zino →
This entry was posted in sales and tagged aiada, autoinformed, autoinformed.com, Ken Zino, offshore brands. Bookmark the permalink.