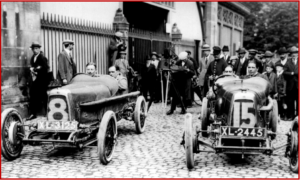 A dubious proposition then and now?

For the first time in six decades, Aston Martin will make its racing debut at the start of the 2021 Formula 1 season in Melbourne.

The Aston Martin Formula One Team will reveal in February its 2021 livery – working on sponsors – and driver line-up with four-time World Champion Sebastian Vettel,  from Ferrari and infrequent Grand Prix podium finisher Lance Stroll from Williams and Racing Point –  at the home of Aston Martin in Gaydon.

The Aston Martin name had been established on the hill-climb courses of Great Britain during beginning of the last century. Lionel Martin had success at the wheel of his own car. However, Grand Prix racing around Europe promised the wider fame and sales he wanted for his company.

Whether that holds true today given the tatters that F1 was in last year remains to be proven. The 2020 F1 season is one I won’t miss. (I guess the nicest way to characterize the last race is “strategic.” This is a polite way of saying there wasn’t any racing going on. Ferrari with six straight losing seasons. Mercedes dominating qualifying and the races as it had for years on years. YAWN. Changing 2021 down-force doesn’t appear to be anything but a meaningless tweak. I know: don’t write your lede on the way to Australia in 2021. Still it reminds me of the McClaren mid-1980s domination years that badly damaged F1 with its lack of racing. )

During the ‘Roaring 20s’ that Lionel Martin dream moved toward reality when Martin was introduced to a young racing driver, Count Louis Zborowski. The  wealthy son of a Polish Count and an American heiress had a need for speed, and a love it’s said for motorsport.

Today Aston Martin said that “Zborowski had ample resources at his disposal which, allied to his existing knowledge of Aston Martin as a driver of some the brand’s earliest side-valve open wheel racers, gave him the confidence to commission not one but two race cars from the business.”

Money meant a serious effort. “Working with Lionel Martin and his team they hit on a plan to build two cars to compete in the 1922 Isle of Man TT (Tourist Trophy) event. Zborowski supplied around £10,000 for the project… a fortune at the time – with the money going toward not only the cars but also the creation of an entirely new 16-valve twin overhead cam four-cylinder race engine,” Aston Martin said.

The first Aston Martin Grand Prix car had a 1,486cc engine. This was good for 55 horsepower at 4,200 rpm. The car weighed 750kg, had a top speed of 85mph and carried two seats – one off-set, as per the Grand Prix regulations of the time, to accommodate the riding mechanic who was an essential because part of his job was to pressurize the fuel tank via a hand pump. The car was driven by road to the race meetings it competed in.

However 16-valve race engines had been successfully developed for a few years by 1922 – Peugeot, Bugatti and A.L.F.A. all had large capacity 16-valve units for racing and speed record activities. A 16-valve engine was deemed necessary. The genesis of the Aston Martin powerplant is in racing lore a tale of intrigue, thievery and  ill-gotten money. Count Zborowski’s friend and fellow racer, Clive Gallop, had an acquaintance with Peugeot engineer Marcel Gremillion. The Frenchman had been a pupil of the great engine designer Ernest Henry, who was then at Ballot.  Gremillion coaxed Henry to let him have details of the 3.0-litre Ballot engine. Henry tore his drawings in half which Gremillion then adapted into the Bamford & Martin single cam, 16-valve, lower-half in return for what was described as a substantial bag of gold coins!

The racing cars – chassis TT1 and TT2 were intended to race in the Tourist Trophy event on 22 June 1922. The tight timing was against the team and they could not be made ready. Instead, it was decided to give the cars their first outing at the 2.0-litre French Grand Prix on 15 July at Strasbourg – thereby marking Aston Martin’s debut in Grand Prix competition.

Zborowski was at the helm of TT1, with Len Martin (no relation) as his mechanic, while Clive Gallop piloted TT2 assisted by mechanic H.J. Bentley (also no relation).

“Perhaps unavoidably because of a lack of power due to the engine’s smaller-than-race-required capacity, alongside their hurried development and a regulated need to carry ballast, both cars retired with engine problems. But the experience was sufficiently exhilarating for the fledgling team, based at Abingdon Road, Kensington, to continue Grand Prix adventure,” Aston Martin said.

Having been hastily constructed initially, the TT cars were developed over time and in the months and years that followed they secured several podium finishes including a second place at the 1922 Grand Prix de Penya Rhin, staged on the Villafranca circuit. The team repeated the result at the same event the following year; and took third at the Grand Prix de Boulogne, also in 1923.

The untimely death of Zborowski in 1924 at the wheel of a racing car, signaled the beginning of the end of Aston Martin’s first foray into premium motorsport and, many successful privateer appearances notwithstanding, it would be another 20 years before the brand made another serious impression in Grand Prix racing. Aston Martin withdrew from top-flight single seater motorsport in 1960. It returned as only a title sponsor and technical partner of Red Bull Racing – one of two Formula One teams owned by beverage company Red Bull GmbH; the other being Scuderia AlphaTauri.

However, Red Bull uses Honda Engines. However, Honda said it will officially pull out of Formula 1 after the 2021 season. This leaves only 3 F1 engine suppliers – Mercedes, the Driver and Maker champion for 2020; Ferrari, not powerful enough the likely reason Vettel left to go to Aston, and Renault. It might be time for another Aston engine caper via, say, a Saudi Prince? (see AutoInformed on Aston Martin Cuts Deal with Yas Marina Circuit in Abu Dhabi)