Aston Martin has Web Darling in Vanquish. Sales to Follow? 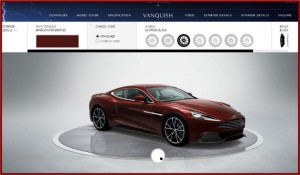 Aston claims Vanquish numbers of 0-62 mph in 4.1 seconds and a top speed of 183 mph – clearly in the super car category much beloved by web voyeurs.

A week after its internet debut, the new Aston Martin Vanquish is breaking viewing records at the automaker’s site.  The end of last week saw the three highest traffic days ever recorded on Aston Martin’s global website – www.astonmartin.com – as car fans around the world clicked to find out more about a new V12-engined touring car. Whether web interest translates to sales to punters with the minimum of £189,995 when the Vanquish goes into production late this year remains to be proved.

Aston has been selling about 4,000 cars a year since the Great Depression began, producing revenues of £506.8m in 2011, the highest level since 2008. Earnings were £76.2m. However, profitability was hurt by ongoing investments in new cars and market development, which resulted in a decrease of 18% from the 2010 EBITDA figure of £93.3m.

The Vanquish launch film – http://www.youtube.com/watch?v=jEXQA-eMolQ – is currently at almost 200,000 views since Wednesday 20 June making it, the fastest-growing video the Gaydon-based sports car maker has ever produced. On Thursday last week, the film was among the top 50 YouTube videos worldwide.

Powered by a revised naturally aspirated 6-liter V12 gasoline engine and a carried over Touchtronic 2 six-speed automatic gearbox, the new Vanquish has a power peak of 565 horsepower (573 PS) and 620 Nm of torque at 5,500 rpm. This means it is Aston Martin’s most powerful production model yet, unless you count the upcoming limited edition £1.2m One-77 supercar, as in 77 cars for the supercar, which Aston says is sold out.
https://www.autoinformed.com/wp-admin/plugins.php

Aston claims Vanquish numbers of 0-62 mph in 4.1 seconds and a top speed of 183 mph – clearly in the super car category that is much beloved by web voyeurs.

“This is the latest incarnation of everything we know, informed and developed from One-77. It is the ultimate Super Grand Tourer – confident and assured – and is the newest representation of Power, Beauty and Soul,” gushed Aston Martin Chief Executive Officer, Ulrich Bez.

2 Responses to Aston Martin has Web Darling in Vanquish. Sales to Follow?