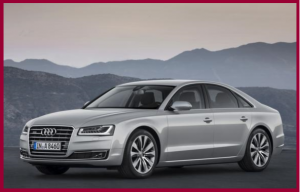 Audi’s extensive use of aluminum carries over.

A revised Audi A8 is due at German dealerships this November after its public debut at the Frankfurt Motor Show in September. Audi claims only a small increase is coming, with prices for its flagship starting in Germany at €74,500 or $99,600. Standard now are LED headlights in all V8 models.

U.S. shoppers will have to wait a year or so before they can look at the big sedan, and the sophisticated computer controlled LED headlights used in Germany remain illegal in the U.S.

As with all revised models from all automakers, Audi is claiming the new A8 design is more “expressive,” starting with the engine, grille and front bumper. The basic car is dimensionally unchanged at 202.32 inches in overall length. The A8L, much favored by government leaders, grows 5.12 inches in both length and wheelbase.

Extensive use of aluminum carries over. The 3-liter A8 with the normal wheelbase has a curb weight of “just”4,034.46 pounds, which is claimed best-in-class for models with all-wheel drive. The body is made almost entirely of aluminum.

The new A8 comes standard with an eight-speed transmission. The electronically controlled automatic is part of the quattro permanent all-wheel drive. Audi also offers an optional sport differential for the rear axle, which distributes the power between the rear wheels as needed. The sport differential is standard in the S8 and the A8 4.2-liter V6 diesel quattro.

At a recent speech, Scott Keogh, head of Audi in the U.S. predicted new annual U.S. record sales of more than 150,000 vehicles during 2013. If accurate, it would be the fourth consecutive full-year record for the luxury car brand. Audi Ag predicts that it will post global record sales of 1.5 million vehicles this year. (Audi Sport Racing Teams Key to Selling Street Machines and Volkswagen Group Euro-Bit. Q2 Profits Drop 11% to €2.85 Billion)

Ken Zino is an auto industry veteran with global experience in print, broadcast and electronic media. He has auto testing, marketing, public relations and communications expertise garnered while working in Asia, Europe and the U.S.
View all posts by Kenneth Zino →
This entry was posted in new vehicle and tagged a8, autoinformed, autoinformed.com, Ken Zino, luxury cars. Bookmark the permalink.