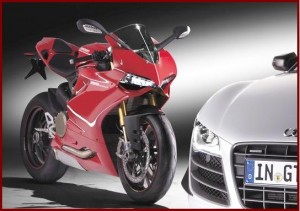 In a statement, Audi said that the deal – for an unspecified amount – would be completed as quickly as possible once it is  authorized by the competition authorities. This is the third Italian business venture for the Volkswagen Group after its earlier successful acquisitions of  Lamborghini and Italdesign.

“Ducati is known worldwide as a premium brand among motorcycle manufacturers and has a long tradition of building sporty motorcycles. It has great expertise in high-performance engines and lightweight construction, and is one of the world’s most profitable motorcycle manufacturers,” said Rupert Stadler, Chairman of the Board of Management of Audi.

Ducati has manufacturing operations at its headquarters in Bologna and in Thailand. It maintains a series of importer companies in strategic markets. Audi said that the motorcycle market will “enjoy strong growth over the next few years,” especially in Asia where Honda dominates.

In 2011, Ducati sold around 42,000 motorcycles and generated revenue of some €480 million, employing around 1,100 people. Honda sold more than 16 million motorcycles globally with sales of more than 12 million in Asia.

Ducati was founded by Adriano and Marcello Ducati in Bologna in 1926. Known originally as Società Scientifica Radiobrevetti Ducati, it initially built parts for radios. Ducati started making motorcycles in post war Italy in 1949.